Yautja
The Yautja Bow[1] is a new weapon of the Yautja that is introduced in the game Predator: Hunting Grounds.

The Yautja Bow appears identical to the bows used on Earth, but is much deadlier, as it is capable of dealing massive damage to its prey, and pinning enemies to walls and other structures at death. 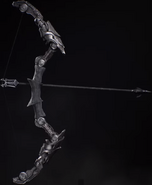 Retrieved from "https://avp.fandom.com/wiki/Yautja_Bow?oldid=259214"
Community content is available under CC-BY-SA unless otherwise noted.