"You'd better watch yourself, Private — the Company rep's just powered up the automated defenses, including some really nasty experimentals."
―The Commander to Anderson (from Aliens versus Predator)

Xenoborgs were cybernetically-enhanced Xenomorph cyborgs, created by the Weyland-Yutani Corporation in an attempt to make the ultimate "super-soldier" weapon at the end of the 22. century. They were initially developed aboard the USS Odobenus space station above Acheron (LV-426) in 2189.

The Xenoborgs are cyborgs — a fusion of organic and mechanical materials in one "living" form. Designed as a highly advanced combat weapon and a form of super-soldier, they were armed with incredibly powerful laser cannons, guided by a laser targeting system incorporated into the Xenoborg's head.

Due to the large amount of heavy metals added to the Xenomorphs' regularly lithe forms, Xenoborgs were slow movers, and also required a significant start-up period before becoming fully combat-ready. However, once activated and online, they were incredibly deadly, capable of killing an opponent in seconds with their laser weaponry. Their construction also made them highly resistant to damage, requiring the use of heavy weaponry like the M83 SADAR to destroy them.

At least three known prototype Xenoborgs were deployed aboard the USS Odobenus in an attempt to combat the Xenomorph infestation there. As part of their programming, they attacked anything in sight, ultimately leading to their destruction at the hands of Private Anderson.

Two Xenoborg was deployed inside a USCM-controlled Xenomorph habitat facility, where it guarded the entrance into the Hive. Eventually a Predator raids the facility to hunt for the Queen, eliminating most of its garrison and defenses, the Xenoborgs included.

Livermore Evanston, a secret Weyland-Yutani employee created his very own Xenoborgs on Blior. These Xenos captured and transformed into cyborgs in the cloning facility (the first specimen is captured on Ryushi by Livermore himself, this marked the beginning of his world conquering plan). Livermore's Xenoborgs are bigger and faster than an avarage Xeno, also, they had neurotransmitters in their heads. With it, the humans could controll them, however, this greatly reduces their combat effectiveness, because they move like robots, a skilled Yautja could easily destroy them.

The Xenoborgs got a cyborg exoskeleton made from chromium alloy, also they got an organ of vision (protected by metal casing). Some of the Xenoborgs head resembled a Queen's head, also all of them had extra limbs with thumbs. Just like the Xenoborgs in 2189, these cyborgs used weapons too, just not powerfull laser cannons.

Livermore produced 21 Xenoborg, all of them destroyed by Machiko Noguchi, Attila, Bakuub, and the Brave Nation Clan in the cloning facility and Evanstonville. The cyborgs set loose after their neurotransmitter burned out during the fight. The unleashed Aliens then destroyed by the self-destruct sytem, what is located in their head. Livermore dies during the fight, the cloning facility is destroyed and all the Xenoborgs are eliminated. 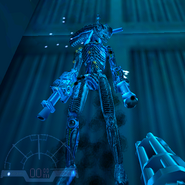 Add a photo to this gallery
Retrieved from "https://avp.fandom.com/wiki/Xenoborg?oldid=237422"
Community content is available under CC-BY-SA unless otherwise noted.