Xenopedia
Register
Don't have an account?
Sign In
Advertisement
in: Weapons and technology of the Hunt, Predator (film) weapons, Predator 2 weapons,
and 7 more

Yautja
Wristblades,[1][2] also known as Gauntlet Knives,[3] are the most basic of Yautja weapons and arguably the species' signature armament. The blades take the form of retractable, serrated blades between six and eighteen inches in length and two to eight inches wide that extend over the back of the hand from a gauntlet worn on the Predator's wrist. Generally, Yautja wear a single gauntlet on one wrist fitted with a pair of parallel blades, but there are a number of stylistic variations to this basic arrangement.

Despite their relative simplicity, Wristblades are the weapon of choice for most Predators. The deadly blades are sharp enough to cut through bone and are intended for use against unarmored combatants or those who have been disarmed. As a last resort, they can sometimes be fired as a projectile from their gauntlet.[4]

The wristblades are among one of the first weapons a Yautja youth obtains.[5]

Wristblades, owing to their exclusively close-range nature, are considered among the most honorable weapons a Predator can use when killing prey.[2] As a point of pride, the Brawlers arm themselves exclusively with these melee weapons, inflicting a crippling amount of damage without using ranged weapons.[6]

Wristblades are not without drawbacks. For one, some longer blades are not covered by a hunter's Cloak and even when they are, they will sometimes be visible through the cloak if covered in large amounts of blood or gore.[4] Not all Wristblades are resistant to the acidic effects of Xenomorph blood and will consequently melt during combat with Xenomorphs, though this problem seems to apply only to Young Bloods, possibly to encourage them to use their more acid resistant weapons, as the Yautja evidently possess the means to forge metals that are immune to Xenomorph acid.

On BG-386, Dark was able to open doors in ancient Yautja ruins by inserting his Wristblades into specific slots, indicating they have been in use for centuries and also carry non-combat uses, at least in ceremonial temples.[7]

Several variations of the standard Wrist Blade design have been seen.

Promotional render of the Wristblades from the video game Predator: Concrete Jungle. 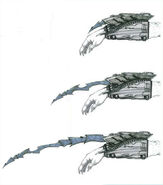