Working Joes, also referred to as Maintenance Synths,[1] were a line of rudimentary androids manufactured and sold by the Seegson Corporation. They were encountered aboard the decommissioned space station, Sevastopol, in 2137 and later in 2202, on the surface of LV-895, by Amanda Ripley-McClaren and the Colonial Marine fireteam, respectively.

Unlike the human-resembling synthetics of Weyland-Yutani or Hyperdyne Systems, the Working Joes feature hairless rubber skin, LED eyes, a robotic voice and lack facial movement. While this is a result of inferior technology and manufacturing by Seegson, the models are marketed as being purposely designed this way to make it obvious at a glance that they are synthetics, as opposed to the Weyland-Yutani models that can be easily mistaken for a human being.[citation needed] As such, Seegson heavily markets their product line towards humans who fear the ability of synthetics to pass themselves off as "real people".

While they are considerably stronger than humans, Working Joes are inferior to W-Y models such as Samuels, who was able to effortlessly destroy a Joe with his own hands when provoked.

Seegson offers the Joes as a package of androids and a governing artificial intelligence, (in Sevastopol's case, it was APOLLO). Its marketing approach is twofold:

The majority of Working Joes are the standard model, identifiable by their industrial overalls.

Many archive logs can be picked up in the station that mention the Joes. Some of them are advertisements whilst others are logs recorded by residents that either express a suspicion to them or portray them making a complaint regarding them. Seegson executive B. Ransome in particular, had recorded an angry message of him describing that he had been attacked by one in his apartment.

Also present on the station is a model easily identified by an even more unsettling and hoarse voice to the typical Joe and full body hazardous environment gear. They are only encountered around APOLLO's core and Reactor Maintenance. They are more resilient to damage received by firearms and craftable items, and are notably immune to the effects of EMP mines and the stun baton. However, they move at an even slower walking pace than the standard model, making them easier to evade.

Joes were also rumoured to have been commissioned for use as combat synthetics, though the validity of this is unknown.[2]

"You and I are going to have a talk about safety"
―Working Joe synthetic in hostile mode (from Alien: Isolation)

The Working Joes possess little independent operating capacity and are completely subservient to the directives of their governing APOLLO A.I. They operate in two modes, identifiable by the color of their "eyes":

The Joe's polite attitudes and formal vocabulary are comically contrasted by their murderous intent when APOLLO had overridden their primary synthetic programming.

"Unidentified species."
―A Working Joe, to a Xenomorph (from Alien: Isolation)

If the Alien and a Working Joe encounter each other, neither the Alien nor the Joe will interact with each other physically; the Joe will go about its business and the Xenomorph will ignore the synthetic. This is likely because the Joe is seen as a simple piece of machinery to the Drone. However, the presence of a dismembered Synthetic in the Gemini Exoplanet Solutions lab module implies that there have been circumstances in which the Alien has attacked a Working Joe or vice versa.

Despite any programmed safeguards, a Joe will not act to protect human beings from the Alien.

The Union of Progressive Peoples were rumoured to have commissioned Working Joe's to be utilized as combat synthetics.[2] This was later proven true with the emergence of the Dzho Automaton, also known as the "Fighting Joe".[3]

Working Joes saw use during Sevastopol Station's run, governed by the APOLLO A.I. After learning of a potential Xenomorph outbreak on Sevastopol Station in 2137, Weyland-Yutani purchased the outdated station and remotely installed an "operational ruleset packet" into APOLLO, which included Special Order 939.[4] As part of the software update, APOLLO began scanning the station for Xenomorph presence, and upon discovering the creatures in the station's reactor maintenance sector (where they had begun constructing a Hive) the computer activated the special order on 11/24/2137.[4] APOLLO shut off all communications, and subsequently reprogrammed the Joes stationed at the comms center to prevent anyone from attempting to send a message off-station - Comms manager Hughes was killed after confronting a Joe about the issue. Amanda Ripley-McClaren would go on to encounter several Joes within the center, and later still during her plight for survival.

Due to the efforts of Marshal Waits using Amanda as bait, when an Alien was later jettisoned from the station in the Gemini Exoplanet Solutions module, APOLLO responded by ordering all Working Joes to hunt down and kill the station's remaining human inhabitants to ensure the survival of the specimens. All Joes on the station would go on to be destroyed after the station plummeted into KG-348's atmosphere.

Working Joes were encountered by a squad of Marines from the UAS Endeavor within Pala Station and on the surface of LV-895.

The Joes' crude look was inspired by 1970s resuscitation dummies.[5] The androids were originally intended to have brown, rubbery hair, but this was dropped in favor of the sleeker bald-headed design.[6]

The androids' behavior, and by extension Seegson's corporate policy, was inspired by a sign that Alien: Isolation writer Will Porter read in a North Carolina McDonald's restaurant in 1999 — 'Why not ask about our orange drink dispenser?'[7] This statement later evolved into the Joes' line, "Why not ask me about Sevastopol's safety protocols?" but more so struck Porter with its absurdity. "To me, this is the voice of Seegson," Porter later said in an interview. "An ineffectual boardroom (forever leaking talent to the likes of Weyland-Yutani) sending out nothing but self-deluding missives that have little to no use on Earth – let alone for the real people suffering on a dilapidated space station floating alone on the edge of space."[7] Fellow writer Dion Lay went on to explain the Joes' vocal patterns, likening them to "those automated messages you get when you phone a call center — the content of the words are polite and friendly but it's lacking any real sincerity".[7] The darkly comedic way these polite messages are often at odds with the Joes' murderous actions stemmed from Lay's love of cult British television, which often contained similar abstract, understated horror.

The earlier version of the Working Joe model, which featured a blue outfit and a different face.

A comparison of the pre-alpha demo and release version of the Working Joes.

One of the first Working Joes encountered aboard Sevastopol Station.

Joes in stasis aboard Sevastopol.

A requisitions android in stasis.

A requisitions android awakened by Amanda.

Close-up of a hostile Working Joe.

Various "mannequin" versions of the Joes in the Synthetic Showroom located in Seegson Synthetics which were supposedly intended for "display purposes only".

A cosplay guide to the standard Working Joe outfit.

Smythe, one of the numerous crewmembers ruthlessly murdered by a Joe. 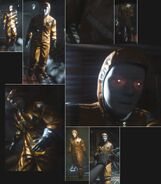 A Hazardous Environment Joe lurking around the station.

The Working Joe that had attacked Ransome in his apartment.

One of the many advertisements for a Working Joe on-board Sevastopol.

Graffiti sprayed by survivors regarding the Joes. Possibly as a warning.

Working Joes as they appear in Aliens: Fireteam.

Original sketch of a Working Joe by Tristan Jones.

Concept art of both Joes.