Left side of his face burned by Xenomorph blood and missing a tusk.
Helped contain the 2004 Gunnison, Colorado Xenomorph infestation.
Fought a Predalien.

Wolf was a veteran Yautja and relentless Xenomorph hunter who arrived on Earth to contain a Xenomorph outbreak in Gunnison, Colorado in 2004. He killed at least five humans of the town, slayed many Xenomorphs and fought a Predalien in combat.

Wolf was killed when a tactical nuclear bomb was dropped on Gunnison by Colonel Stevens, along with the Predalien he was battling and any surviving Xenomorphs and residents in the town.

Wolf was an accomplished Xenomorph hunter and elite-ranked Yautja. At some point, he was scarred by a Xenomorph's acidic blood, burning the left side of his face and losing him his upper left mandible.

In 2004, Wolf picked up a distress call from a Yautja Scout Ship that had crash landed on Earth. Traveling to Earth from his species' homeworld, Wolf landed in Gunnison, Colorado and quickly located the remains of the ship and its dead crew. Accessing the bio-helmet recording of one of his dead brethren, Wolf discovered that a Predalien had caused the crash and was now loose on the planet along with several Facehuggers that were aboard the ship. Armed with two Shurikens, Wristblades, Dissolving Liquid, which appears to enzymatically destroy biomass, and an extra Plasmacaster, Wolf used the Self-Destruct Device on his backpack to destroy the ship and began the pursuit of the Xenomorphs, seeking to eliminate any and all evidences of their presence on Earth.

Wolf killed Deputy Ray as he caught sight of the Predator melting Buddy and Sam Benson's dead bodies at night while the police are looking for them and the dead facehuggers that infected them. As Ray tried to run away, Wolf killed him and hung his skinned corpse by a tree. He tracked the residue of the Facehuggers to the town sewers. He set three laser nets to contain the Xenomorphs. As soon as he was in the center of the sewers, he baited the Xenomorphs to his location. Once the Xenomorphs were contained, he activated the nets, trapping the Xenomorphs inside. He killed two Xenomorphs before the Predalien attacked him. While preparing to kill another two, the Predalien hit him with its tail which caused Wolf to misfire and collapse a part of the sewer, leaving a hole to the streets. He got up, but too late to stop the Xenomorphs and the Predalien from escaping into the town. Wolf used his Power Punch Glove in his wrist gauntlet to break out of the sewers and continued to pursue the Xenomorphs.

Wolf tracked one of the Xenomorphs to the Gunnison power plant, where he tried to use his Plasmacaster to kill it. Due to the electro-magnetic interference from the power plant, his targeting systems malfunctioned and he fired on the power plant generators, knocking out all the power to the town. The Xenomorph spotted Wolf and crawled beneath him before climbing up and whacking the Predator off the walkway. Wolf attempted to kill the deadly life form but missed and the Xenomorph escaped into the town. Relentless in his mission, Wolf continued to search the town for Xenomorphs and destroyed the one located in the swimming pool of a local school.

He healed his wound and followed Kelly O'Brien and her daughter Molly to the town gun store after killing a man named Karl at the town's graveyard, where he captured Dallas Howard to use as bait for the Xenomorphs. Dallas escaped, but the bait was enough to draw the Xenomorphs out. A fight followed as Wolf killed a pair of armed store employees and all the five Xenomorphs in the store. During the fight, one of Wolf's Plasmacasters was damaged. After leaving the gun store, he integrated his two Plasmacasters into a custom-built, handheld Plasma Pistol.

Wolf then followed the Xenomorphs to the hospital, where they were making a Hive. He entered the hospital and was attacked from behind by the Predalien, but he injured the Predalien with his wristblades prompting it to send three Xenomorph Drones against him. He destroyed the three and struck down another two Xenomorphs with Shurikens, accidentally killing Ricky Howard's love interest Jesse Salinger. After that, a Xenomorph managed to push Wolf down an elevator shaft as he was being distracted by the enraged Ricky and lost his Plasma Pistol. He killed the Xenomorph, climbed back up to the roof of the hospital and destroyed another Xenomorph that was about to kill Dallas Howard.

At that moment, a Lockheed Martin F-22 Raptor sent by the US Government dropped a tactical nuclear bomb onto the city. Wolf was killed along with the Predalien, the other Xenomorphs, and the remaining humans in the resulting blast.

Wolf is distinguished by a missing mandible, an acid-scarred face, a white (presumably blinded) eye, a large collection of trophies from many different species, a large arsenal of weapons, a large collection of helmets, and a throne overlooking a valley which appears to be a Yautja settlement. He is shown to have been in many battles and being a participant in many Hunts. This is evident by the many signs, or rune type markings upon his chosen helmet, and also by the damaged mandible tusk/tooth of his upper-left jaw.

Wolf has also been equipped with weapons not seen in other Predator theatrical releases, such as the Whip he used in his final battle where he fought the Predalien. These, and many other aspects, show that he was a formidable warrior and fearsome hunter. Moreover, The Wolf was firm enough to overpower two Xenomorph Drones at once and to hold his ground against a far more powerful adversary such as the Predalien.

Wolf used a wide variety of weapons such as:

In Aliens vs. Predator: Requiem, the new Predator was labeled by the directors as Wolf — after the homonim character in Pulp Fiction, due to his function of 'cleaner'. Played again by Ian Whyte, it was supposed to be an elite, extremely experienced hunter, who has underwent many missions before the events of the film.[4]

Following the directors’ specific instructions, Amalgamated Dynamics, Inc. (ADI) once again redesigned the Predator. As opposed to the muscular, comic-inspired Predators of the first film, Alien vs. Predator, Wolf returned to a slimmer configuration — more akin to the original Stan Winston design. "We were adamant about creating a new, unique Predator," the Strause brothers said. "With a physique and features that reflected the original films — and the Wolf achieved that in spades." The directors found the Predators from the previous film too disproportioned, and tried to use Whyte as a performer as much as possible; with only one main Predator, its proportions were based strictly on the performer's. The Predator's head features, however, a new configuration: a flatter face, proportionally bigger mouth and mandibles, as well as two single upper canines. "We wanted to re-proportion the face," said Tom Woodruff, Jr. in AVPR: Inside the Monster Shop, "giving the brow a more cunning, sweptback angle, like a predatory cat." To add a visual clue of the Predator’s past fights with Aliens, the left side of its face is plagued by a considerable acid burn, which has almost completely consumed the creature's upper left mandible, and blinded its left eye (which was re-colored in post-production). This aspect was inspired by "Broken Tusk", the Predator character from the original Aliens vs. Predator comic book series. Colin Strause explained the connection: "One of the cool things was — we wanted, y’know — to give a little throwback to the comic book fans, so that’s why we kind of did the Broken-Tusk type of idea, with the melted off mandible."[4]

The Predator's helmet was heavily inspired by the City Hunter from Predator 2's. Added to that basic outline were a grey, stone-like color scheme and texture, as well as thorns and marks on its forehead plate; it is unknown whether those marks have any ritual or religious meaning akin to the Alien symbol drawn by the Predators of the first film. As Wolf is an experienced hunter — to the point where it tries to shoot Aliens at point blank — the directors wanted his Wristblades to be shorter, and his body to be less covered in armor. In addition to dual Plasmacasters, the Combistick, the collapsible buzz saws and said Wristblades, the Predator came with a new paraphernalia: a 'Power Gauntlet' — housed in the left forearm — that allows enhanced strength packed in a single punch, mines, the Dissolving Liquid (all designed by Chris Howe), and the Whip. The last was in particular the key weapon of Wolf — who wraps it around enemies to slice parts of them off. It was not originally scripted; Colin Strause said: "the whip was actually… that was one of the really cool surprises that ADI brought to the table. In one of the first meetings, all of us started looking at this one design at the same time, which was a Predator whip. All of us, the light bulb went on, ‘We gotta have that. This has to be in our movie’; and we wrote it into the film after just seeing it on that design."[4]

ADI built a hero suit and a stunt suit, composed of the body and all the armor parts, which could be put on and taken off. As per the precedent film, this Predator is never shown with the original mandible closure. In a manner similar to the insert 'talking' Predator bust from Predator 2, the Wolf Predator's eyes were not contact lenses, but rather fully animatronic elements, in order to give the character a more beast-like, and less humanoid vibe. This mechanical design choice was also dictated by the outline of the Predator's head. Alec Gillis, in his commentary for the film, stated that the intention was also to make them more visible in the darkness — like a predatory cat's.[4]

Wolf in the sewers.

Wolf with his dual Plasmacasters. 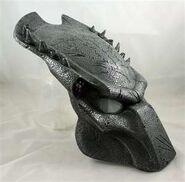 Wolf and the Predalien prepare to battle.

Wolf as seen in AVP: Evolution. 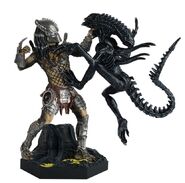 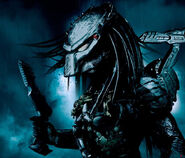 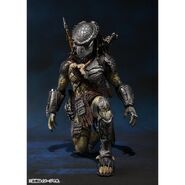 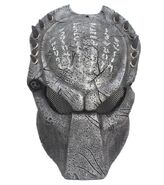 Everybody's friends at the end of the day; Ian Whyte as Wolf alongside Tom Woodruff, Jr. as the Predalien.

Retrieved from "https://avp.fandom.com/wiki/Wolf_(Earth)?oldid=258275"
Community content is available under CC-BY-SA unless otherwise noted.