Yautja
The Whip also known as a Razor Whip is a fast-moving Yautja weapon. A segmented handheld bullwhip that wraps around a target, and once pulled taut is capable of cutting it in half. Resistant to Xenomorph acid, due to it possibly being constructed out of a Xenomorph's tail. It was used by Wolf on his mission to wipe out the Xenomorphs overrunning Gunnison, Colorado.

At least three distinct variants of the Razor Whip are known to exist.

The basic variant of the Whip, the Shivcutter Razor Whip was the smallest and least-robust variant of Whip. It was presumably fashioned out of a Drone due to the small barbed tip.

The Lifescythe Razor Whip was a more robust variant of the Whip, it appeared to be fashioned out a different type of Xenomorph to the Shivcutter due to the size and color difference between the two. It was capable of inflicting more damage than the Shivcutter.

The Praetorian's Tip Razor Whip was a variant of the Whip presumably fashioned from the tail of a Praetorian Xenomorph. Because of this, they were tougher, larger, and more lethal than the other variants. Segments of the Whip were dyed in a crimson red. They were also known to inflict corrosive wounds by means of acid, how this is accomplished is unknown. 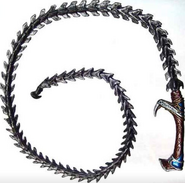 Retrieved from "https://avp.fandom.com/wiki/Whip?oldid=264743"
Community content is available under CC-BY-SA unless otherwise noted.