The Weyland-Yutani Commandos were elite special forces troops privately owned and deployed by the Weyland-Yutani Corporation. A group of these commandos were notably dispatched to Fiorina "Fury" 161 aboard the USCSS Patna in 2179, under the command of Michael Bishop, in an unsuccessful attempt to recover a live Xenomorph specimen from the Fiorina 161 Class C Work Correctional Unit.

The commandos provided security for Michael Bishop and his team of Weyland-Yutani Bio-Weapons Divison researchers and scientists, sent to the Fiorina 161 Class C Work Correctional Unit aboard the Patna with the intention of capturing the Runner Xenomorph that was loose there. However, they arrived too late, and the Runner had already been killed by Ellen Ripley and the lone prisoner survivor, Robert Morse.

Knowing of the Queen embryo inside Ripley, Bishop sought to acquire her cooperation, but his plans were essentially undone when the commandos opened fire on Robert Morse, hitting him in the leg. Another survivor, guard Francis Aaron, subsequently attacked Bishop with a metal bar and before Bishop could call his men off the commandos gunned Aaron down for his actions, killing him. Ripley ultimately committed suicide to prevent Bishop acquiring the Xenomorph, just as Dwayne Hicks and Stone arrived at the facility to witness her death. The commandos subsequently captured Hicks, Stone and Morse before leaving the planet empty handed.

The Weyland-Yutani Commandos on Fiorina 161 were clad in full-body Apesuit body armor, designed to protect them from Xenomorph attack and the creature's acidic blood in particular. Several of the commandos were armed with M41A Pulse Rifles finished in black, while others carried more rudimentary nooses and snares to help them capture the Runner.

W-Y Commandos during the ending of the arcade game Alien3: The Gun.

The cameraman that accompanied the commandos to Fiorina 161. 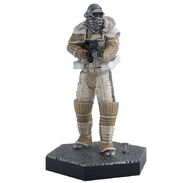 Eaglemoss Collections figurine of a Commando. 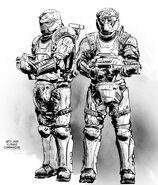 Original sketch of the commandos by Tristan Jones.
Add a photo to this gallery

One of the "Dog Catcher" W-Y Commandos seen in Alien3.

The commandos leaving the prison. 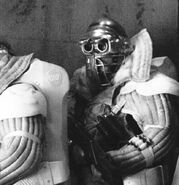 A view of a commando's backpack.

Concept art of W-Y Commandos.
Add a photo to this gallery

Retrieved from "https://avp.fandom.com/wiki/Weyland-Yutani_Commando?oldid=239739"
Community content is available under CC-BY-SA unless otherwise noted.