"This is Waits, Colonial Marshal at Sevastopol Station. We have a serious situation here."
―Waits (from Alien: Isolation)

William Hope
Marshal Jethro[3] Waits was a member of the Office of the Colonial Marshals on Sevastopol Station. When a lone Xenomorph was unleashed on the station by the crew of the USCSS Anesidora in 2137, Waits and his men struggled to keep order. He was encountered by Amanda Ripley when she arrived on Sevastopol to recover the USCSS Nostromo's flight recorder, which had also been brought there by the Anesidora.

Waits was killed by a Working Joe android when APOLLO began using the synthetics to kill any remaining human survivors, acting in response to Special Order 939.

"Since that... thing appeared on Sevastopol, my team and I had been struggling to keep order."
―Waits, to himself (from Alien: Isolation (comic))

Waits was informed of a creature that was attached to Catherine Foster's face through a message sent by K. Lingard. Waits decided to keep the situation at a low profile to avoid causing any distress among residents, although many became suspicious. After the Drone became loose on Sevastopol Station in 2137, Waits and his men struggled to keep order aboard the station.

After receiving numerous demands from residents, Waits was forced to establish a public meeting located at the Spaceflight Terminal to address numerous rumors regarding the Marshal's shady behavior. However, Waits was extremely evasive and avoidable of the matter which lead to a negative backlash from the crowd as well as a gunshot being fired among them, causing panic. The Marshals then forcibly ejected everyone from the terminal. Deaths were marked by a red pin on a map in the Colonial Marshal bureau. At some point, Seegson Working Joe 937, designation "Chuck" reported to Apollo, Sevastopol's mainframe, that the Colonial Marshal ability to contain the unrest was poor, and that "official reports" indicated that Waits had a drastically reduced force under his command. Waits was also flagged as a person of interest by a Seegson executive mandate and was supposed to be watched closely.

It was established that Waits and the Marshals were already unpopular with the station's inhabitants before people began disappearing on-board Sevastopol, as the Marshal's crackdown on black market dealings after the decommissioning of Sevastopol had earned the resentment of many.

"This is a fool's errand, Waits."
―Turner to Waits (from Alien: Isolation (comic))

At some point, Waits' team received a sighting of the Drone near engineering; Waits, armed with a shotgun, brought the last of his men — Turner, Garcia and Harris — to investigate. The team found two dead and a locked door and Wait's team was getting antsy. Turner called the mission a "fool's errand", but Waits responded by asking him if he forgot about "the thing pinned to your chest" and that they have a duty to hunt the "thing" down before it kills anyone else. Turner then told Waits that the population didn't even recognize their authority anymore and had no faith in them. He also added that they were unsure if their weapons could even kill the creature, and that they knew nothing about "it", but Waits asked if Turner wanted to run off like Ross and if he wanted to turn in his badge and ditch them.

Garcia then managed to open the locked door, but the Xenomorph was waiting on the other side and quickly killed him, before impaling Harris with its tail. Waits ordered Turner to fire, forcing the Drone back into the doorway, Turner quickly sealing the door when Waits shouted "Now!" However, the Drone moved above them via the vents, knocking out a grate and dragging Turner into the vents, blood raining down. Waits then shouted at the Drone to come back, asking, "What about me?"

"Turner. Was he right? What can I do?"
―Waits, placing the pin marking Turner's death (from Alien: Isolation (comic))

Six hours later, in the room with the map, Waits added Garcia, Harris and Turner's pins to the map. Waits adjusted his badge and then left the room, armed with his shotgun. Later, in habitation, he found Chuck, who had just killed Clark. Chuck asked if he could "help" Waits, but Waits immediately shot the synthetic with his shotgun, decapitating it. Waits then walked away, saying, "Damn androids."

After the crew of the Torrens arrived on the station on December 11, Waits and Ricardo found Samuels and Taylor. During an argument between Waits and Samuels, Amanda Ripley arrived with medical supplies for Taylor. Waits explained to Ripley that the Alien was brought on board the station by Henry Marlow, the captain of the Anesidora, the ship that found the Nostromo's flight recorder.

The group went to the Colonial Marshal bureau. Ripley spoke with Marlow, who was being kept in a cell by Waits because of his refusal to follow quarantine procedures.

After Ripley finished talking to Marlow, she joined Waits' plan to contain the Alien by attempting to trap it in the Lorenz SysTech Spire. As she finished locking down all the escape routes and initiating the emergency lockdown, Ricardo was unable to get the exit door open, ultimately sealing Amanda inside the area with the Drone. Ricardo eventually resorted to overriding the lockdown to open the exit and save Ripley, at the expense of allowing the Xenomorph to escape.

With "Plan B" failed, Waits suggested that Ripley take the elevator to a remote location of Sevastopol, the Gemini Exoplanet Solutions module, to lure the Drone there in a second attempt to trap it. However, once the Alien was contained, Waits apologized to Ripley and ejected the module from the station with Ripley still inside. Amanda was eventually able find an EVA suit and eject herself from the module to return back to Sevastopol, while the Alien was left behind in the jettisoned module as it fell into KG-348. She deeply scolded Waits, calling him a "heartless bastard" over the comms and angrily told him that she would deal with him once she arrived back at the bureau.

With the Alien disposed of, the situation aboard the station appeared back under control, but the station's androids abruptly began hunting down and killing the station's remaining human survivors. Ripley then told Waits over the comms about this, but Waits explained that while he doesn't know why, the androids seem to be "hunting". When Ripley asked what he meant by this, he simply replied, "Standby".

Shortly afterward, a group of Working Joes reached the bureau and began slaughtering the bureau's inhabitants. Waits angrily ordered the synthetics to leave the survivors alone and stand down, but one of the Joes attacked him. Ripley overheard the struggle via her headset, with Waits being strangled to death. When she later returned to the bureau, she discovered Waits' corpse, his head bashed against the wall, along with the other survivors she had previously encountered that were killed by the Joes. The only member to survive was a distraught Ricardo, who managed to hide from the androids.

Waits is characterized as an incompetent albeit well-meaning marshal who only made the situation worse by keeping the Xenomorph outbreak in the dark to the rest of the station's inhabitants. Like Marlow, he tried to dispose of the creature using extreme methods and he used Ripley as bait for this, nearly killing her when he jettisoned her along with the Drone. It's implied[4] that Waits (and the Marshals by extension) may have used brutal interrogation methods in order to extract information from suspects, as Waits can be heard mockingly calling Heyst a "tough guy" when he refuses to speak, before telling Turner to shut off the recording, noting that "maybe our friend here is just shy."

Despite this, he morally meant well as he considered it his duty to ensure the safety of the residents and would do so by "any means necessary." Even as he approached death, he put his own people's safety first.

Waits also suffered from survivor's guilt when his team was killed by the Drone, even going as far as to shout for the creature to come back when it took Turner into the vents, saying, "What about me?"

As a Colonial Marshal, Waits wore a jacket with "MARSHAL" on the back and a badge with "WAITS" on it. He also wore a light blue button shirt, black tie, matching belt and shoes, and grey pants. 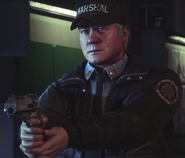 Waits with his weapon drawn in-game. 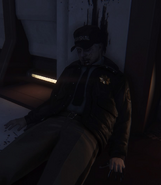 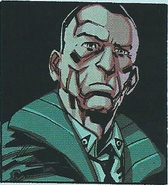 Waits as he appears in the prequel comic.