The Weyland-Yutani Model 102 Sniper Rifle,[citation needed] also known as the WY-102 Railgun, is a semi-automatic railgun manufactured by the Weyland-Yutani Corporation and used primarily by the company's armed forces and the United States Colonial Marine Corps.

The WY-102 Railgun is a weapon designed for extreme range and is used by Weyland-Yutani armed forces such as Weyland-Yutani security teams and combat androids. However, Corporate mercenaries (Iron Bears) and even the Colonial Marines used the WY-102 in roles of long range fire support and assassination. It fires a super heated slug at extreme velocities that can pierce most forms of body armour and even penetrate thick armour plating of vehicles and structures.

The WY-102 Railgun is often employed by Weyland-Yutani security force on forward positions to oversee perimeter defences and act as spotters for incoming enemy forces. They are most actively used by the personnel on the Weyland-Yutani operation held on LV-1201 by Dr. Eisenberg and the Corporate mercenaries, the Iron Bears. The weapon's rotary gas chamber is stimulated with each round of fire. 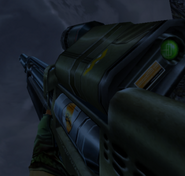 Retrieved from "https://avp.fandom.com/wiki/WY-102_Sniper_Rifle?oldid=223338"
Community content is available under CC-BY-SA unless otherwise noted.