Vincent "Vinny" di Angelo was the personal bodyguard and chief assassin for Don Giovanni, the head of the Mafia in Neonopolis.

di Angelo was in Giovanni's fortified compound when it was raided by the Juvenite Pack-9 gang, and was killed by Scarface when the Predator used the assault as a distraction to raid the mansion and reclaim its equipment.

A fan of heavy weaponry, Vinny was also keen on sending victims to the bottom of the bay surrounding Don Giovanni's private island with their feet in concrete. In 2030, Don Giovanni and his gang were targeted by the Yautja hunter Scarface. After disabling the defenses and shielding around the island, Scarface aids the Juvenite Pack-9 gang, who use a Ulysses android they've stolen from the police, to break into the Don's mansion. Inside, Scarface proceed to wipe out both groups - killing Don Giovanni and taking the head of Vinny, as a trophy. 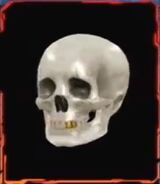 Vinny's skull in Scarface's trophy cabinet.
Add a photo to this gallery

Retrieved from "https://avp.fandom.com/wiki/Vinny_di_Angelo?oldid=229177"
Community content is available under CC-BY-SA unless otherwise noted.