"Distephano, take the weapons."
"Begging your pardon, sir, but FUCK YOU!"
―Dr. Wren and Pvt. Distephano (from Alien Resurrection)

Raymond Cruz
Private First Class Vincent "Vinnie" Distephano[5][6] was a soldier stationed aboard the United Systems Military vessel USM Auriga. He was the last person to perish as a result of the Xenomorph outbreak that occurred there, actually dying aboard the Betty after escaping the Auriga.

"Any serious problem and the ship autopilots back to home base."
―Distephano, to the Betty crew (from Alien Resurrection)

Distephano had taken the position aboard the Auriga in the hope that such a top-secret posting would open up opportunities to take part in high-level special operations in the future. At the time the Betty arrived aboard the Auriga, he had just three weeks left of his one-year tour.[7]

When Annalee Call was caught attempting to sabotage Dr. Wren's Xenomorph recreation project, Distephano was among the men who accompanied Wren to the recreation hall, where they attempted to place the Betty crew under arrest for aiding and abetting a terrorist. As the soldiers readied their weapons, Distephano held his rifle to the back of Hillard's head, but was quickly disarmed when the situation turned violent. Distephano was the only one of the soldiers to survive the brief firefight.

"Go help Call turn on the auxiliary pump!"
―Johner to Distephano, unwittingly sending him to his death (from Alien Resurrection)

Before the Betty crew could plan their next move, the Cloned Xenomorphs aboard the Auriga instigated a mass breakout, and within minutes the vessel's crew was either captured, killed, or had evacuated, leaving Distephano and the other survivors in the recreation hall, along with Ripley 8, stranded aboard the ship. When it was revealed how many Xenomorphs were on board, Distephano was given his rifle back by Hillard. The group elected to make for the Betty in an attempt to escape. Despite an arduous journey that saw several of the survivors perish and Wren's betrayal of the group, they eventually reached the Betty.

Shortly afterward, Wren appeared and took Call hostage as a human shield before shooting Larry Purvis in the shoulder. When Johner and Distephano raised their firearms to shoot Wren, the doctor ordered Distephano to take the weapons. No longer on Wren's side, Distephano coldly responded, "Begging your pardon, sir, but FUCK YOU!"

After threatening to execute Call if the group doesn't comply, Distephano and Johner finally put their guns on the ground. Wren declared his intentions to continue his research on the Xenomorphs, and Distephano, having seen what the species is capable of, called him 'crazy' for still wanting to bring them back on Earth, an opinion backed up by Johner, who nearly attacks Wren seconds later after the latter insults his intelligence.

Seconds later, the Chestburster inside Purvis begins to birth. In agony, Purvis got up and rushed at Wren, who released Call to engage at Purvis. After weathering multiple gunshot wounds from Wren, Purvis attacked him and virtually beat him to death before holding Wren's head to his chest. The emerging Chestburster subsequently burst through Purvis's chest and Wren's head, killing Wren instantly. Call then claimed Wren's handgun and she along with Distephano and Johner shot the creature to death, as well as the dying Purvis by proxy.

Shortly afterward, Ripley returned. Distephano remarked, "I thought you were dead" upon seeing her, to which she responds that she "gets that a lot". After Call fails to return after being sent to switch on the auxiliary pump, Johner sends Distephano to help her.

However, unknown to the survivors, the Newborn had got aboard the Betty and had cornered Call in the ship's cargo hold. While searching for Call in the cargo hold, he heard her warn him about the creature. Confused, he turned around - only to be faced with the Newborn. Despite his caution, Distephano simply froze when confronted by the monstrous creature, and as he stood motionless it crushed the hapless soldier's head with its bare hands.

It is likely that Distephano's body was later destroyed when the crew re-entered Earth's atmosphere.

Distephano was an honest soldier; while he did not necessarily agree with (or care about) what the USM were doing aboard the Auriga, he was focused on his job and determined to serve with honor. While initially a faithful servant of Dr. Wren, after being spared by the crew of the Betty he gradually came to realize that he had been working for the wrong people, and eventually sided with the smugglers against Wren.

Throughout the events on the Auriga, Distephano's main weapon was a standard issue Lacrima 99 Shockrifle. 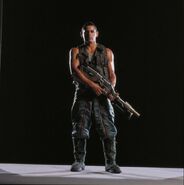 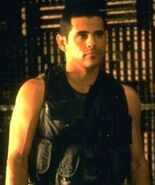