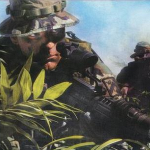 Hi, welcome to Xenopedia! Thanks for your edit to the Talk:M41A Pulse Rifle page.

First off, great to see you helping out with the Predator: Concrete Jungle pages! They needed some work.

But are you sure about the altered spelling of Les Servituers? The previous spelling, Serviteurs, would be correct in French, which is where the word comes from. I haven't played the game for ages, so I'm not sure how it's spelt there.--Leigh Burne (Talk) (Contribs) 07:42, September 26, 2014 (UTC)

It's easily the best Predator game I've played too. It's let down a bit by clunky controls, but otherwise it's a blast. The story's great, and it's one of the few Predator games I've played that adds genuinely awesome new weapons to the character. Plus there's something darkly comic about skinning people and just leaving them hanging from billboards around town :D

The -uers spelling must have been a typo on here. I confess, I haven't really had much involvement with the Concrete Jungle pages (except Scarface, which I overhauled recently) because I've mostly been concentrating on getting the film-related articles up to scratch. So please feel free to improve things, and yes, they could do with more images.

As for the "Victims" revert, it was mostly just a consistency thing. Every other Predator article on here just lists "Known Victims". 'Known' kind of implies they had a name. I dunno, I guess it's debatable, but if we're going to alter one, we should do it on all the pages. Maybe "List of Notable Victims" would be better?--Leigh Burne (Talk) (Contribs) 09:13, September 26, 2014 (UTC)

Well the main reason I added those sections to the Predator and Alien character pages was to show which characters that also have articles on here were killed by them. So the unknown victims bit is kind of irrelevant in that respect, because they have no articles. I'm pretty sure the Scarface page makes it clear elsewhere that Scarface was a badass mofo, I seem to remember writing something about him being one of the most prolific Predators who ever lived, so I don't really think we need "some unknown guys" in the list of victims section.--Leigh Burne (Talk) (Contribs) 09:27, September 26, 2014 (UTC)

Out of interest, where did you find those HD Concrete Jungle videos you were using to capture better character images for the game's pages? I've had a look but the only one I can find on YouTube in true HD quality only shows the very beginning of the game. I was gonna help out capturing some images.--

That's fine. I don't mind helping out with the images myself while you're busy. Be good to see you back when you get some more spare time. And thanks for the link!--

Retrieved from "https://avp.fandom.com/wiki/User_talk:Nomad416?oldid=243951"
Community content is available under CC-BY-SA unless otherwise noted.