Xenopedia
Register
Don't have an account?
Sign In
Advertisement
in: Yautja individuals, Film characters, The Predator characters,
and 9 more

"Hello. I have enjoyed watching you kill each other. I came here to destroy this vessel, you cannot have it. But what you can do, is run. I can see someone, among you who is a true warrior, the one called Mac Kenna. He will be your leader, he will be my prize. I offer time advantage. Go."
―The Upgrade Predator (from The Predator)

Genetically modified Yautja
Larger and stronger than a normal Yautja

Brian A. Prince
Kyle Strauts
The Upgrade Predator,[2] also known as the Ultimate Predator[citation needed] or the Assassin Predator[citation needed], is a genetically modified Predator and arch-nemesis of the Fugitive Predator. His goal was to assassinate the Fugitive and prevent him from delivering the "Predator Killer" to humanity so that they could fend off an invasion of some kind.

The Upgrade Predator was eventually killed by Quinn McKenna, who used the Predator's wrist gauntlet to fire an explosive at the creature's leg, causing Upgrade to blow up before finishing him off with multiple shots to the head.

The Upgrade Predator is a product of hybridization, that is to say, his DNA is made up of many different creatures from different worlds which give him even more powerful abilities. This was the motivation behind his kidnapping of Rory McKenna, perceiving his autism as a desirable quirk rather than a disorder. Standing at 11ft, he was taller, faster, and stronger than a normal Predator and he could manipulate his body to give him a tough armored exterior. He also didn’t need a bio-helmet to have thermal vision which suggests he could have some form of implant. Unlike regular Yautja, he has bulletproof exo-skeletal skin that can reflect gunfire at close range and even shatter Wristblades that make forceful contact with his skin, thus terminating the need of extensive use of body armor during the hunt. It is revealed that he was an unnatural creation as he has taken DNA from other dangerous creatures from different corners of the galaxy and used them to alter his genetics, enhancing his size and strength in process.

His biology may not be his own doing, but the collaboration of several research-caste Yautja to create a form of super hunter of their race. Stargazer reveals that the Fugitive Predator had human DNA, meaning this hybridizing is not unique to the Upgrade Predator. Also, the Upgraded Predator had Predator hounds to assist him in the hunt similar to the Tracker on the Game Preserve Planet.

The Upgrade Predator appears in his ship pursuing another spaceship. The ship contains the Fugitive Predator who is later revealed to have stolen some important Predator technology from him. Upgrade does some severe damage to Fugitive’s ship but he jumps into hyperspace, escaping Upgrade. Fugitive’s ship crashes on Earth and is captured by a government agency.

The Upgrade Predator arrives in Earth’s orbit and begins scanning for his target. Meanwhile, Rory McKenna is in his basement and is playing with a Predator device. Upgrade flies into Earth’s atmosphere and activates the ship’s cloaking mechanism. Rory inadvertently decloaks the Upgrade’s ship using the device which in turn, makes his ship appear on the military radar. Upgrade reactivates the cloak while the military sends some F-22s to check out the anomaly.

Rory is still using the device and decloaks the ship again, this time in front of the F-22s who have to make a swift manoeuvre. Upgrade flies over the base where Fugitive is escaping while being pursued by two F-22s. The F-22 manage to attack the Predator ship but Upgrade fires off a blast which destroys one of the F-22s.

Upgrade later lands his ship in the middle of a forest and exits the ship with two Predator Dogs. He lets the dogs sniff a rag to track down the Predator device. The dogs attack Rory and The Loonies at the school and then the Fugitive Predator hunts Quinn and Rory inside of the school. As Fugitive throttles Quinn, the Upgrade Predator punches through a wall and drags Fugitive through it, stunning him. Upgrade changes his skin to give himself armour and asks Fugitive where the stolen technology is. Fugitive manages to fire a blast of his Plasma Caster towards Upgrade but misses. Fugitive then uses his wristblades which simply snap off against Upgrade’s tough armour. Upgrade quickly kills Fugitive by smashing his face with a punch before he proceeds to pull off his head and spine.

The Loonies escape and Upgrade sends a transmission back to his clan informing them that the traitor has been eliminated and he will track down the stolen cargo. His clan asks if there are any human leads and replies “Several”. Upgrade later arrives at Quinn’s residence, killing several government agents and scans the basement for clues. Rory has drawn a map to the location of Fugitive’s spaceship. The government agents make their way to Fugitive’s ship while the Loonies attempt to free Rory. Lynch is acting as the sniper for the team but Upgrade severs his arm with a plasma blast.The Upgrade descends onto the site, killing many military personnel and enters the Fugitive Predator’s ship.

The military have set up a translation device to interpret the Predator language. The Upgrade Predator uses this and tells them that he has come to that location to destroy the vessel and that they should run. He says that he detects one among them who he considers a true warrior – the one called Mac Kenna, and that he will be their leader. The group initially think he’s talking about Quinn, but instead it is his son Rory. The Upgrade gives the group a seven and a half minute head start to escape. Upgrade prepares the ship’s self destruct mechanism and exits the ship. He pursues the group into the forest while the ship explodes.

Upgrade catches up with the group, kills numerous military personnel and is seen in the trees biting the head off a soldier. He descends from the trees and attacks the group. He fires his wristblade at Casey who uses the Fugitive’s helmet to deflect it. The helmet falls to the ground and accidentally fires off a blast which hits Upgrade. Upgrade falls back into a trap the team had created which covers him in a highly flammable gas. Nebraska fires a shot, igniting the cloud of gas which sets Upgrade on fire. Baxley jumps onto Upgrade, stabbing him numerous times. Upgrade throws Baxley, impaling him on a tree branch while he fatally wounds Coyle. The Predator falls off the edge and into the water. Upgrade then confronts the remaining survivors and takes Rory as a prisoner back to his ship.

As Upgrade is about to take off, Quinn, Nettles and Nebraska jump onto the ship. Upgrade activates the ship’s forcefield, but Quinn hides underneath it while Nebraska jumps on top and unfortunately, Nettles' legs are severed in half. Nebraska throws himself into one of the ship’s engines which causes it to explode sending the ship back to the surface. Quinn enters the ship and attacks Upgrade but the Predator fires a harpoon weapon which restrains him. Quinn falls out of the ship and it crashes to the ground.

A badly injured Upgrade chases after Quinn. As he is about to kill him, a cloaked Casey appears behind him and jumps on him, firing multiple shots into the Predator’s head. Quinn pushes him off the edge and he falls back towards his ship. Rory activates the ship’s forcefield which severs Upgrade’s arm. As Upgrade attacks Quinn, the surviving Predator Dog attacks the Predator. Quinn manages to retrieve the Predator’s severed arm and adds an explosive onto the wristblade. He fires a shot into the Predator’s leg which explodes. Upgrade is fatally injured in the blast, losing all of his limbs. Quinn fires multiple shots into his head, finally killing him.

The Upgrade Predator possesses the same sort of weapons & equipment as a regular Predator (with exception of Bio-helmet and Plasmacaster since he can use thermal visions to see his targets possibly via. eye implant and Wrist Cannon, stronger version of Energy Flechette), such as wristblades installed within his wrist gauntlet which could also be fired like harpoon, cloaking device, and his race's standard body armor albeit sparsely given to his ability to harden his skin into exoskeleton. 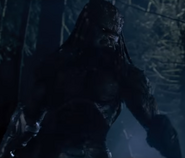 The Assassin stalking the Loonies in the trees. 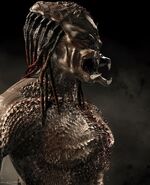 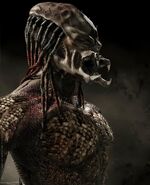 The assassin predator transmitting a message back to his clan.

The Upgrade Predator throws the Fugitive Predator onto a car before killing him. 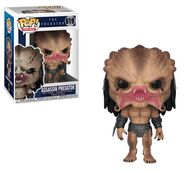