Union of Progressive Peoples
The United Americas[1] (UA) was a powerful human federation. It was formed in 2103[2] by the merging of North, Central and South America into one socioeconomic block.[3] A major colonizing and starfaring power, the United Americas was notably home to the United Americas Allied Command, through which it operated the Colonial Marines and United Americas Outer Rim Defense Fleet, together representing the era's most powerful interstellar peacekeeping force.[4]

The United Americas was the most powerful starfaring and colonizing nation in the 22nd century. An economic and political giant in both the Sol system and throughout the offworld colonies, the military might of the UA was unparalleled.

Created in 2104, the United Americas largely emerged as a response to the formation and growth of the Three World Empire, which was at the time pioneering space exploration and extra-planetary colonization.[3] This alliance allowed the Americas to catch up to the 3WE and become pioneers of space travel and extrasolar colonies in their own right. However, soon after its creation, many off-world colonies refused the authority of the new government; the world of Torin Prime descended into civil war when a terrorist rebel faction calling themselves the J’Har seized the colony, murdered planetside officials, and killed or imprisoned anyone not loyal to their cause. Fearful that other colonies would follow suit, the UA was left with no choice but to make an example of Torin Prime. As the J’Har rounded up more than half the population and interred them in concentration camps, the newly formed United Americas Allied Command (UAAC) worked with counterinsurgents planetside to retake the world. When the J’Har managed to gain control of a flotilla of warships, the Outer Rim Defense Fleet responded in kind. The civil war escalated into a larger space war and took two years to resolve, but in the process, the UA cemented their standing as a powerful nation amongst the stars. In the 2150s, the UA annexed the mineral rich Khadaji system that once belonged to the 3WE since the 2120s. In 2157, UA and Weyland-Yutani co-funded the colony of Hadley's Hope on LV-426. After a coup d'état by a Union of Progressive Peoples-friendly faction on Tientsin, the UA were summoned and sent the Colonial Marines into what would become the infamous Tientsin Campaign against the UPP, which left the planet totally ravaged. Since 2163, the UA managed to push Rimward through the Solomons (at the time the farthest recorded reach of humanity into the unknown) and began establishing colonies there. In the 2160-70s, the Anglo-Japanese world of Linna 349 suffered a revolt; the UA again sent the Colonial Marines to squash the rebellion and established an occupation force once the conflict ended, to 3WE's reluctance. After Hadley's Hope stopped transmitting in July 2179, Weyland-Yutani requested that the United Americas send an investigation team consisting of a Colonial Marines skeleton crew from the USS Sulaco with a civilian consultant and a WY representative to find out what was going on. After the loss of the Sulaco and the destruction of the colony, the UA grew more and more suspicious toward WY, suspecting their involvement in all recent events.[5]

The Washington Treaty played a pivotal role in the merger, defining the member states’ responsibilities to the union and outlining provisions for military action performed under the flag of the United Americas. The United States of America stood at the forefront of the newly formed nation, its preexisting scientific and military industrial complex paving the way for the United States Colonial Marine Corps to become humanity’s premiere peacekeeping force throughout the colonies.[6][5]

The United Americas is essentially an extension of the government of the United States of America, and as such is run by a President, Vice President, and a Congress representing all member signatories. On the Frontier, any encounter with UA leadership is likely to be with a Colonial Marshal, a bureaucrat from Colonial Administration or a commander of the Colonial Marines.[5]

The UAAC is the joint command of military forces of all members of the United Americas. It is comprised of the United States Colonial Marine Corps (USCMC), the Canadian Colonial Armed Forces (CCAF), the Latin American Colonial Navy (LACN), The United States AeroSpace Force (USASF), and the United Americas Outer Rim Defense Fleet (UAORDF). Headed by the Secretary of Defense, the allied command is a think tank of high level admirals and generals who devise strategy for, and coordinate, all major combat operations.[5]

Founded before the United Americas merger, the primary focus of the USCMC is to maintain the security of all UA member states and extrasolar colonies. The USCMC spearheads all military campaigns undertaken by the United Americas Allied Command. They maintain several bases across the territories and are stationed at all UA garrisons, placing them within striking distance of nearly any hot spot. While they often operate in tandem with the Aerospace Force and Outer Rim Defense Fleet, they operate their own fleet of frigates and troop transports. At a constant state of readiness, the USCMC has the technology and training to deploy troops at a moment’s notice and operate an independent unit for extended periods in hostile environments without any support. Throughout the eight decades since its inception, the USCMC has engaged in armed conflicts on nearly thirty extrasolar worlds. They have fought rogue nations and rebel colonies, as well as faced off against foreign powers in border and resource disputes. They have provided humanitarian aid in natural disasters, protected civilians in terrorist and hostage crises, and secured colonies from hostile lifeforms.[5]

This UA division was formed to protect the rights of all off-world colonists. CA supports and monitors all UA extrasolar colonies and stations and makes sure that supply chains flow as intended, vaccines are distributed, and that a semblance of order is maintained. For decades they have fought to have a minimum wage established for colonists, only to have their efforts blocked by corporate lobbyists.[5]

Office of the Colonial Marshals

The law enforcement arm of the Colonial Administration is the Office of the Colonial Marshals, which maintains police offices throughout the colonies and works with the Interstellar Commerce Commission to prevent the import or export of dangerous biologicals and chemicals. All major Marshal offices have an Interstellar Commerce Commission (ICC) agent attached to them. The Marshals also often work in conjunction with US Federal agencies.[5]

With the UA having many contracts and treaties with the 3WE, they are somewhat obligated to protect their worlds in addition to their own. Despite maintaining a somewhat peaceful relationship, the UA keeps a close eye on 3WE's aggressive expansion efforts and monitors their borders at all times. Tensions have risen since the end of the Linna 349 Revolt as the UA imposed an occupation force on the planet despite 3WE's opposition. Its closeness with WY put the 3WE in a dire situation, because if relations deteriorate further between the UA and WY, the 3WE could be dragged into the conflict, meaning a full-scale war between the two blocs.[5]

Having many business holdings with the UAAC, Weyland-Yutani can request assistance from the Colonial Marines to provide security if needed, at most USCMC's platoon commanders displeasure. However, since the Hadley's Hope Incident and several USCMC units gone missing under the UA's jurisdiction, a USCMC recon battalion has found growing evidence that Weyland-Yutani might be involved and many tensions have since existed between the two entities since.[5]

Since the Tientsin Campaign in 2162, they are in a state of cold war with the UPP. Since 2183, the United Americas are engaged in increased border conflicts with the UPP over disputed worlds.[5]

Aside from its terrestrial presence, the UA also oversaw several extra-planetary colonies, including that of Olympia on Luna[7]. As the 3WE became the pioneer for humanity's expansion into the core systems and Outer Veil, most of the colonies of the United Americas occupy a vast area of the Outer Rim Territories called the American Arm. The UA Allied Command operates military bases and stations throughout all the territories and additional colonies are laced along the Frontier. Key worlds including Bracken's World, Terraform 3, Morning Glory, DP-27 Prison World and the Crestus Garrison Systems.[5] 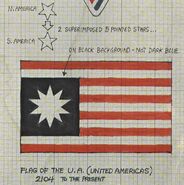 Concept sketch of the United Americas flag, by Ron Cobb.