"It was an ugly ship. Battered, overused, parts repaired that should have been replaced, too tough and valuable to scrap. Easier for its masters to upgrade it and modify it than to build a new one. Its lines were awkward and its engines oversize. A mountain of metal and composites and ceramic, a floating scrap heap, weightless monument to war, it shouldered its way brutally through the mysterious region called hyperspace. Like its human cargo, it was purely functional. Its name was Sulaco."
―Aliens novelization, chapter 4

Bug Stomper
Smart Ass
USS Sulaco was a Conestoga-class troop transport ship in service with the United States Colonial Marine Corps, assigned to 2nd Battalion Bravo Team.[4] It was most notably used in the investigation of the Hadley's Hope colony on Acheron (LV-426) in 2179, when it was manned by Lieutenant Scott Gorman's combat unit of Colonial Marines.

Sulaco was considered an unlucky ship — it was the thirteenth Conestoga-class vessel to be constructed and had something of an infamous reputation in the USCM.[3]

Commissioned in 2169[5], USS Sulaco was involved in 2171[5] in a major operation on the planet Linna 349, where it was struck by two ASAT missiles — the only fleet vessel to be damaged while in orbit.[3] Despite attempting to misdirect the incoming warheads with decoy ballutes, two of the six-missile salvo struck Sulaco's cargo hangars, detonating fuel and stores. The fire was only controlled by opening the hangar doors and venting the atmosphere to space and jettisoning the cargo.[6] This incident gave the vessel something of an unlucky reputation within the United States Colonial Marine Corps (USCM), a reputation that was reinforced when the ship was involved in a docking accident at Gateway Station in 2176[5] that caused the loss of five crew members. It was even suggested that Sulaco's reputation led to some crews simply refusing to use the ship.[3]

In 2179, Sulaco was dispatched to Acheron (LV-426) under the command of Lieutenant Scott Gorman following the loss of contact with the colony of Hadley's Hope. Upon reaching the moon, the small contingent of Colonial Marines and advisors from the Weyland-Yutani Corporation deployed to the surface aboard the dropship Bug Stomper, leaving Sulaco in orbit on automatic pilot. Following the discovery of a Xenomorph infestation at Hadley's Hope and a disastrous ambush that decimated the Marines on the surface, Sulaco's backup dropship, Smart Ass, was readied, fueled and brought down to the surface via remote control by Executive Officer Bishop, allowing the few remaining survivors to be evacuated.

Upon returning to Sulaco, the survivors - Bishop, Ellen Ripley, Corporal Dwayne Hicks, and Rebecca "Newt" Jorden - discovered that the Xenomorph Queen from Hadley's Hope had stowed away aboard Smart Ass. Ripley engaged the Queen in Sulaco's hangar bay with a Power Loader used to load ordnance onto the dropships, eventually ejecting the Queen into space through an airlock. Hicks sent a distress call back to the USCM before the remaining personnel entered hypersleep.

On the return journey to Earth, a Facehugger from an Ovomorph left by the Queen made its way to the survivors and cracked a cryotube, spilling the Facehugger's blood and causing an electrical fire in the ship's hypersleep chamber. Due to the fire, the occupied cryotubes were jettisoned in a Type 337 EEV which subsequently crash-landed on Fiorina "Fury" 161, killing both Newt and Hicks, damaging Bishop further and leaving Ripley as the sole survivor. What happened to Sulaco after this point is not established.

On the return journey to Earth, Sulaco was intercepted by USS Legato and illegally boarded by Weyland-Yutani PMCs with the intention of discovering more about the Xenomorphs and what exactly had happened during the ill-fated Hadley's Hope mission. The PMCs tried to capture Hicks, Samwell Stone and Turk inside the hypersleep chamber. Instead, stray gunfire from a PMC's M39 hit the Facehugger attached to Ripley, spilling its blood and causing an electrical fire in the ship's hypersleep chamber. Turk was knocked into Hicks' open cryotube and sealed inside. Due to the fire, the occupied cryotubes were jettisoned in a Type 337 EEV, which subsequently crash-landed on Fiorina "Fury" 161, killing both Newt and Turk, damaging Bishop further and leaving Ripley as sole survivor.

Sulaco was later boarded again by personnel under Michael Bishop's command and returned by them to LV-426, where it was apparently used as a confined environment in which to study the Xenomorphs. The ship was eventually discovered by the crew of the USCM vessel USS Sephora, who had been sent to investigate the events on LV-426. As Sephora Marines boarded Sulaco, it became apparent the Xenomorphs being studied on board had escaped confinement and overrun the ship. Various sections of the ship had been turned into localized Hives where many of the Colonial Marines were cocooned and impregnated with Chestbursters.

As the Colonial Marines from Sephora attempted to combat the situation, surviving Weyland-Yutani personnel used the ship's weapons systems to open fire on Sephora, instigating a pitched orbital battle. Sephora was ultimately destroyed in the surprise attack, with the resultant explosion heavily damaging Sulaco as well, leading to its ultimate break-up in LV-426's upper atmosphere.

The Sulaco is named after a fictional town in Joseph Conrad's 1904 novel Nostromo (the name of which was used for the USCSS Nostromo in the original Alien). A number of other ships in the franchise are named after elements from Conrad's works as well, including the USCSS Patna (from Alien3), the USS Verloc (from Aliens versus Predator 2), the USS Marlow (from Aliens vs. Predator) and the USS Sephora (from Aliens: Colonial Marines).

Some social sciences research into the Alien franchise's symbology has considered it significant that Sulaco in Conrad's Nostromo is the home of the white owners of the silver mine figuring in the book, while the Sulaco in Aliens transports soldiers to investigate unknown troubles at a corporate outpost of Weyland-Yutani and to protect the investment — drawing parallels between the corporate owners in Conrad's work and the shadowy business entity forming a central part of the Aliens franchise.

Syd Mead, a principal conceptual designer on Aliens, first designed the Sulaco as a massive sphere, a "heavily armed cargo ship, outfitted to transport material".[7] However, it was realized the spherical shape would create problems with focusing the camera, and was also difficult to impart with a sense of scale.[7] The design also did not meet with James Cameron's vision of a more streamlined craft; he produced a quick sketch of the style of ship he imagined and noted that he was imagining something like a "a forest of antennae enter[ing] the frame, followed by the enormous bulk of the SULACO".

While some claim that the basic shape was based on a submarine, the design has most often been described as a 'gun in space' due to the elongated form resembling the Pulse Rifles used in the movie - with Syd Mead agreeing that (in addition to Cameron's preferences) this was one of the reasons for the switch from the spherical form. Other film analysts have remarked on how the opening shot of the ship as something sinister and weapon-like presages Ripley's transformation during the movie into a warrior figure, akin to the hardened Marines the Sulaco already carries. The opening shot of the ship travelling through space has also been called 'fetishistic' and 'shark-like', "an image of brutal strength and ingenious efficiency" - while the rigid, mechanic, militarized interior of the Sulaco (designed by Ron Cobb) is contrasted to the somewhat more organic and friendly interior of the Nostromo in the first movie (also designed by Cobb). Other sources have noted the homage the initial scenes on board the Sulaco pay to the opening tour through the Nostromo in Alien, particularly in the extended Special Edition cut of Aliens.

Mead has denied rumors in the fan community that actual scientific research had been done into how a futuristic spaceship might work. As an example, he noted that the idea for the early spherical design had nothing to do with creating centrifugal gravity, as such problems had evidently already been solved by science by the time of Alien.

The model of the Sulaco was constructed predominantly of fiberglass and was 5-6' long.[8] It was built by Peter Astin and detailed by Pat McClung, John Lees and Robert Skotak (on one side only; the other side would not be seen by the camera). The Sulaco's approach to LV-426 was storyboarded by Roger Dear.

Due to budget restraints, only six hypersleep chambers were constructed for the film, each at a price of over forty-three hundred dollars. The illusion of additional chambers was achieved by using mirrors.[8] The locker room lockers were built to open with key cards and were fully functional in this capacity. Three different scale models of the dropship bay were constructed for production: a full-scale partial set for the actors' scenes built on one of Pinewood Studios' largest sound stages and two miniature sets, one of which was constructed eight feet wide and twenty feet long with two six-foot dropships inside.

The Sulaco in orbit over LV-426 at the beginning of Aliens: Colonial Marines.

Lettering on the Sulaco's hull. 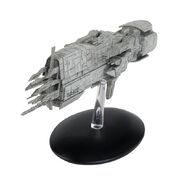 Eaglemoss Collections model of the Sulaco.

Early concept art of the Sulaco

Behind the scenes photo of Sgt. Apone in the Sulaco's hangar.[10]