"This is commercial towing vehicle Nostromo out of the Solomons, registration number one-eight-oh-niner-two-four-six-oh-niner."
―Ripley (from Alien)

Narcissus
Salmacis
USCSS Nostromo, registration number 1809246(09),[3] was a modified Lockmart CM-88B Bison M-Class star freighter owned by the Weyland-Yutani Corporation and commanded by Captain Arthur Dallas, registered out of Panama.[2] Nostromo operated as a tug, connecting to and pulling loads like a tractor truck rather than carrying those loads on board like a traditional freighter.

The ship was destroyed in 2122 when its reactor was set to self destruct by Ellen Ripley in an attempt to kill the lone Xenomorph that was loose aboard the vessel. The ship and its refinery cargo were completely destroyed in the resulting explosion.

USCSS Nostromo was constructed in 2101 as an interstellar cruiser, but was refitted in 2116 as a commercial towing vehicle.[3] Nostromo was subsequently operated as a commercial hauler, transporting automated ore and oil refineries between the outer colonies and Earth.[2] As part of this retrofit, the ship's original Saturn J-3000 engines were removed and replaced with the two immensely powerful Rolls-Royce N66 Cyclone thrust engines, with bipolar vectoring for midline lift function. Each of these N66 engines developed 65,830 metric tons of thrust, using water for reaction mass. When running at full power, the engines produced a high impulse thrust total of 131,660 kN.[5] Seven hypersleep chambers that would accommodate the crew during long-duration flight were also installed at this time. Many of the ship's background systems, including its autopilot feature, were controlled by MU/TH/UR 6000, an artificial intelligence computer mainframe.

When the Weyland-Yutani Corporation detected and partially decoded an unidentified warning signal emanating from Acheron (LV-426),[6] Nostromo was selected (unbeknownst to its crew) to investigate and hopefully recover a potential Xenomorph specimen from the moon. To help ensure the recovery of the creature, Nostromo's science officer was replaced two days before the ship left Thedus with Ash, a Synthetic sleeper agent who, under Special Order 937, was to assist in the recovery of a Xenomorph by any means necessary, even at the expense of the rest of the crew. Upon leaving Thedus, Captain Arthur Dallas transmitted the ship's report packet back to Sol, relaying it through Sevastopol Station.[7]

Nostromo set down on LV-426 on June 3, 2122.[2] The ship was damaged during landing when dust entered one of the engine intakes, causing it to overheat and eventually triggering an electrical fire in the engineering section.[8] When Executive Officer Thomas Kane was later brought back to the ship with a Facehugger attached to him, Ash broke quarantine procedure by allowing Dallas and Navigation Officer Joan Lambert to carry him aboard. Dallas elected to take off from LV-426, despite the fact several non-critical systems had yet to be repaired.

Once underway, the Alien that birthed from Kane began stalking and slaughtering the crew, whose efforts at fighting the creature were hampered both by Ash and, more generally, by the fact it remained on the lower engineering decks, where the security camera systems were still inoperable following the electrical damage caused on LV-426.[4] Eventually, the few survivors decided to set Nostromo to self-destruct in an attempt to kill the Alien while they themselves escaped in the ship's light shuttle, Narcissus. Only Warrant Officer Ellen Ripley survived to make the escape, along with the ship's cat Jones, while Nostromo and its cargo were completely destroyed by the ship's emergency destruction system.

"I remember reading about your ship, actually, when I was a kid. It's gone down in the 'lost without trace' files."
―Hoop to Ripley, regarding the Nostromo (from Alien: Out of the Shadows)

The apparent disappearance of Nostromo was subject to large amounts of news coverage, with speculation as to the cause of its destruction ranging from stray debris to an "uncatalogued asteroid".[9] However, the truth of the incident was briskly covered up by Weyland-Yutani. Company personnel who had given the ship its secret mission to LV-426 destroyed all records of ever having done so, along with any information regarding the warning signal being transmitted by the derelict ship on LV-426.[10] The signal itself was later deactivated by the crew of USCSS Anesidora.[11] Weyland-Yutani lost a substantial amount of money as a result of the loss of Nostromo, a fact that no doubt helped facilitate the cover up — the incident became a black mark in the company's records, and consequently it was something of a taboo subject amongst employees.[12] Nostromo was relegated to the pages of history, where it went down as being lost without a trace.[13] The ship's fate was finally revealed 57 years later in 2179, when Ripley was rescued.

The Nostromo's name was taken from the eponymous hero of the 1904 novel Nostromo by Joseph Conrad. The ship was originally called the Snark, after the Lewis Carroll poem The Hunting of the Snark,[15] then later the Leviathan,[16] before Ridley Scott chose the name Nostromo due to his love of Conrad's works.[17] People and places from Conrad's works would go on to feature repeatedly as the names of space-going vessels in the Alien franchise, inspiring the names of the Narcissus (also from Alien), the USS Sulaco (from Aliens), the USCSS Patna (from Alien3), the USS Verloc (from Aliens versus Predator 2), the USS Marlow (from Aliens vs. Predator) and the USS Sephora (from Aliens: Colonial Marines).

Three scale models of the Nostromo were made for filming: a 12-inch (30 cm) version for medium and long shots, a 4-foot (1.2 m) version for rear shots and a 12-foot (3.7 m), 7-short-ton (6.4 t) rig for the undocking and planetoid surface sequences. The latter of these was so large it could only be moved using a forklift truck, which would plug into two slots on the back of the model.[18] The basic outlines of the smaller models were made of wood and plastic, while the larger had a welded metal frame. Most of the fine surface details were added from model kits of battleships, tanks and World War II bombers, while the miniature of the attached refinery contained parts from several Star Wars model kits in its construction — the release mechanism that secures the Nostromo to the refinery featured the legs of R2-D2 as decorations on its upper surface,[18] while the refinery's underside incorporated panels from Darth Vader's TIE fighter.[19]

Filming of the miniatures took place at Bray Studios near Maidenhead, Berkshire. The Nostromo models were originally painted yellow. However, after the model unit had spent several weeks filming the model, Scott decided to repaint the ship grey and reshoot all of the model work himself. At one point, the refinery being towed by the Nostromo featured towering spires considerably higher than those that appear in the final film, but just before filming Ridley Scott personally removed the upper sections (allegedly with a hammer and chisel).[18] A separate model, approximately 40 feet (12 m) long, was created for the Nostromo's underside, from which the Narcissus would detach and along which Kane's body was launched during the funeral scene.[18] For the scene in which the Nostromo detaches from the refinery, a 30-foot (9.1 m) docking arm miniature was created to the same scale as the largest Nostromo model. To film the sequence, the Nostromo was pushed away from the refinery by the forklift — which was concealed under black velvet — causing the arm to extend out from the refinery, creating the illusion that the arm was pushing the ship forward.[18] Shots from outside the Nostromo in which the characters are seen moving around inside through windows were filmed using larger model sections that contained projection screens showing pre-recorded footage.

The interior of the Nostromo was designed by conceptual artist Ron Cobb. The set constructed for filming was all interconnected and largely sealed, meaning cast and crew had to walk through the various corridors and chambers to reach other areas of the ship. Several crew members commented that the confines of the intricate set meant filming was more akin to shooting on location than in a studio, and that the interior's enclosed nature helped to create a feeling of claustrophobia appropriate to the film.[18] In such a confined set, lighting was a constant issue. To compensate, some of the roof sections were constructed of clear plastic that allowed natural light from the studio outside to filter through, but even so, sometimes actors had to resort to holding the flamethrower they were carrying close to their face so that the pilot flame would illuminate them for the cameras.[20] Some sections of wall could be removed to assist with filming/lighting,[21] but even so the set remained a difficult, cramped environment in which to work.

The look of the Nostromo's corridors was designed to evoke the feeling of a World War II submarine.[19] Much of the interior was dressed with various aircraft parts, acquired by the production team from RAF stock that was being decommissioned nearby at the time;[18] for example, the crew chairs on the bridge were taken from fighter aircraft, with at least some of them being ejector seats.[22] Much of the set dressing in the medbay was genuine medical equipment.[23]

The Mother interface room was designed to mimic a niche in a cathedral, with the myriad of blinking lights representing candles. Much of the ship's interior was fully functional, in that many of the various buttons actually performed some function when activated.[22] The ship's bridge was originally designed as a large, open space with several "floating" consoles and crew seats that projected into a vast glass window at its front.[24] However, cost concerns meant this ambitious set was scrapped in favor of a cheaper design; elements of the original version were notably recycled for the bridge of the Prometheus in the film of the same name some 33 years later. The Nostromo bridge set contained some 40 video monitors,[21] all of which were fully functional — any footage seen on the various screens in the movie was played for real during filming.[23] was made more claustrophobic still when Ridley Scott had the production crew drop the ceiling of the originally spacious set by some 4 feet just before filming began, creating the far more cramped and enclosed space seen in the film.[22] An MK 35 Pressure Suit aboard the Nostromo. 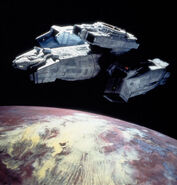 The Nostromo orbiting above a planet.[25]

The Nostromo as it appears in the Aliens: Colonial Marines DLC map Nostromo. Note the tracking devices on the table.

The description of the Nostromo on the Halcyon model's box. 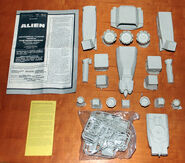 The contents of the model's box. 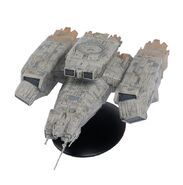 Eaglemoss Collections model of the Nostromo.

The crew of the Nostromo as seen in Alien: The Illustrated Story.

The set of one of the Nostromo's landing gear.

The Nostromo set under construction.

Ron Cobb's "Semiotic Standard" symbols, as seen aboard the Nostromo. 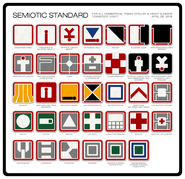 Polaroid images measuring approximately 3.5" x 3.5" taken for reference by a member of the model effects crew during the production at Bray Studios.