watch 01:50
Wiki Targeted (Entertainment)
Do you like this video?
Play Sound

The Trilobite was a massive, octopus-like creature resulting from Charlie Holloway being infected with Chemical A0-3959X.91 – 15 and engaging in sexual intercourse with Elizabeth Shaw. Similar to a Facehugger, its primary purpose appears to be to implant an embryonic Deacon into a host. It is not made clear if the creature was conceived by their intercourse or if the infant creature merely moved into Shaw from the infected Holloway. It is unknown how the creature gets out of its host "naturally", as Shaw removes it prematurely; however its exaggerated movements prior to this suggest that it "bursts" like Bellybursters, emerging from the host's abdomen.

The infant Trilobite resembles a big four-armed squid, however it is extremely aggressive and grows to an incredible size with no biomass to take in, in very little time. Although Shaw attempts to decontaminate the MedPod and kill the infant creature, it is merely rendered unconscious and later grows to an enormous size. When Vickers' lifeboat is jettisoned down onto LV-223 with the Trilobite on board, Shaw releases the Trilobite from the medbay where it attacks the Engineer coming after her. After a brief struggle, the Trilobite is able to subdue and impregnate the Engineer with a Deacon.

The Trilobite dies a short time later and the Engineer births the Deacon.

As an "adult", it resembles an extremely large Facehugger (even larger than Engineers if the tentacles are taken into account), but with many differences. It comprises many large tentacles which are strong enough to subdue the nine foot tall Last Engineer and also has six smaller tentacles that shoot out around its mouth. Unlike a Facehugger, it does not leap onto a victim's face but instead grabs it with its tentacles and attempts to subdue it long enough to impregnate it, after which it settles its considerable body mass on top of the host's body. At the center of its body is a large toothed mouth inside which resides a large feeding tube used to impregnate its host. At the back of the Trilobite, are holes, likely used for breathing or redirecting the air into its host.

During the USCSS Prometheus's mission to LV-223 in 2093, after Charles Holloway is infected by the Black Liquid pathogen, he unknowingly impregnates Elizabeth Shaw with a Trilobite when the two sleep together. Later, when Shaw is about to give birth to the Trilobite, she uses the Pauling MedPod 720i in Meredith Vickers' FTL Lifeboat to remove it from herself. The Trilobite is presumed dead after Shaw decontaminates the MedPod, but unknown to her, it was merely unconscious and would later grow to a massive size.

The Trilobite shares its name with a species of extinct marine arthropods, known through its extensive fossil record; this synonymy comes from the fact early designs for the creature in Prometheus were somewhat based on the trilobite genues Dicranurus, being a vertebrate with two horn-like appendages on its 'head'.[1][2] However, the final design seen in the film bears no relation to the real-world creatures. The creatures pale skin was inspired by the flaky, pale hue that overcomes deceased organisms preserved in formaldehyde.[1]

The infant Trilobite removed from Shaw.

The underside "face" of the Trilobite.

The trilobite impregnating the Engineer.

The Trilobite laying on top of the Engineer.

NECA figures of the Trilobite and Last Engineer. 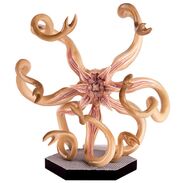 Eaglemoss Collections figurine of the Trilobite.
Add a photo to this gallery 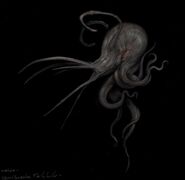 Concept art of the Trilobite infant.

Concept art of the Trilobite infant. 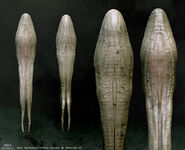 Concept art of the infant Trilobite by Ivan Manzella.

Concept art of the Trilobite impregnating an Engineer. 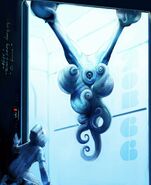 Concept art of the Trilobite by Ivan Manzella.

A 3D model of the Trilobite in ZBrush by creature designer Neville Page.

Retrieved from "https://avp.fandom.com/wiki/Trilobite?oldid=261458"
Community content is available under CC-BY-SA unless otherwise noted.