The Tracking Syringe[1] was a Yautja device notably used by Wolf in Gunnison, Colorado in 2004.[2] The Syringe could collect Facehugger DNA samples which could then be injected into a Yautja's wrist gauntlet in order to to calibrate their bio-helmet's Predator-Vision, enabling them to see Facehuggers[1] and their tracks.[2] The Tracking Syringe had a place to be stored in the Cleaner Case.[3]

When Wolf departed for Gunnison, Colorado in 2004, he carried a Tracking Syringe in his Cleaner Case. When he discovered that Facehuggers had escaped their tubes aboard a crashed Scout Ship, Wolf collected a sample of Facehugger DNA from a smashed tube using a Tracking Syringe. After injecting it into his wrist gauntlet, he could see the Facehugger tracks in the surrounding environment and if they been on a host.[2] 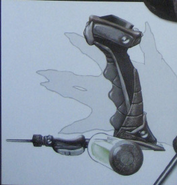 Wolf's tracking syringe.
Add a photo to this gallery

Retrieved from "https://avp.fandom.com/wiki/Tracking_Syringe?oldid=256657"
Community content is available under CC-BY-SA unless otherwise noted.