Top-Knot was a Predator who debut in Aliens vs. Predator: Blood Time. He was the leader of a Pack of nine Young Bloods.

After Vk'leita adopts Machiko Noguchi into Yautja society for being a Blooded hunter, she finds herself a part of Top-Knots pack. In preparation for their Blooding ritual, Top-Knot is charged with capturing a Queen Alien, which he successfully does largely thanks to Machiko. However, her help also means her disobedience; he punishes her for it. His appearance in Hunter's Planet is mostly a flashback.

In War, Top-Knot is one leader among several participating in a massive-world wide Xenomorph hunt. When one of his pack, the human hunter Machiko Noguchi, offends a high ranking Yautja her status as a legitimate blooded Yautja come into question. For this, he requires her to demonstrate her skill against the Yautja Shorty, her long-time rival. Top-Knot gives her a bio-helmet to fight with to make the battle an even one, but despite that, she loses, due to cheating from Shorty.

Top-Knot, then, banishes her from the clan as a Blooded warrior should not fail to an Un-Blooded hunter.

Blood Time details an outing where Top-Knot takes a pack of Young Blood hunters out to be blooded. They descend to the planet after it has been seeded, slog through the swampy world for about two days, and then finally discover the Xenomorphs. Two-Stripes attempts to cheat his rite-of-passage by stealing the prey of Light-Stepper, another Young blood who he watched fight and seemingly die in a battle against a Xenomorph. He takes advantage by taking the Xenomorph's skull and marking himself with it's claws to appear as if there was a struggle, but to his shock, Light-Stepper is still alive.

And manages to hobble back to Top-Knot, who now knows everything. For his crimes, Two-Stripes is striped of armor and weapons and left to die on the planet by Top-Knot's decree.

Topknot, bringing along Machiko Noguchi, is preparing to train a group of twenty trainees. They attack a small Hive, on yet another mission to kidnap a Queen. She is one of several used to seed a planet for one of the biggest hunts Machiko has ever seen, intending to blood his trainees. Several hunters are invited upon their ship, the Shell, for this reason. When Noguchi transgresses on of their Leaders, a Yautja no older than a typical unBlooded. With this third and final infraction upon the laws and ways of their kind, Topknot sees it fit to test Machiko and see her allegedly Blooded prowess with his own eyes.

He does this by utilizing her rivalry with Shorty. It isn't something she deserves, and he knows it, but she must prove herself regardless. Shorty is bigger than her and twice her weight; she loses the fight because he cheats which results in Machiko leaving the Clan for good. 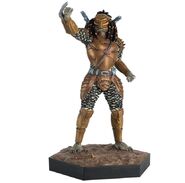 Eaglemoss Collections figurine of Top-Knot.
Add a photo to this gallery
Retrieved from "https://avp.fandom.com/wiki/Top-Knot?oldid=245530"
Community content is available under CC-BY-SA unless otherwise noted.