"You always say that, Frost. You always say, 'I got a bad feeling about this drop'."
―Pvt. Crowe (from Aliens)

Tip Tipping
Private Tim Crowe[1] was a member of the United States Colonial Marine Corps, part of 2nd Battalion Bravo Team.[5] He was a member of the combat unit deployed to LV-426 aboard the USS Sulaco in 2179, to investigate the sudden loss of contact with the colony of Hadley's Hope. He subsequently perished as a result of the Xenomorph infestation at the colony.

Crowe was part of First Squad's rifle team, along with Private Wierzbowski.[3] He was killed during the early stages of the operation when the squad's Pulse Rifle ammunition, being carried in a bag to prevent its use, cooked off in a fire, causing an explosion.

During preparations for the drop on LV-426, Crowe helped to move heavy supplies around the Sulaco's hangar bay using a small motorized cart.[3] During the drop itself, Crowe and Private Frost bantered about the latter's tendency to imply that every drop was going to turn into a disaster; Frost joked that when they returned without Crowe, he'd make sure to call his parents and let them know what had happened to him. Upon landing at the colony, Crowe and the other Marines found it deserted with signs of a recent firefight. The colonists were subsequently located, via their Personal Data Transmitters, inside the nearby Atmosphere Processing Plant.

Inside the Atmosphere Processing Plant, Crowe was one of the first to come to the aid of Private Frost and Corporal Dietrich when the Marines were first ambushed by Warriors, not realizing the bag containing the confiscated Pulse Rifle ammunition was on fire and rapidly cooking off. Corporal Dwayne Hicks pulled Private Trevor Wierzbowski away from the scene, however Crowe was caught in the blast radius; the explosion hurling him against a wall, snapping his neck and killing him almost instantly.

Like Private Wierzbowski, Crowe was one of the more reserved members of the unit, lacking the loud personality of many of the other Marines. However, he was still prone to cracking jokes with the troops.

Crowe was outfitted with standard issue M3 Pattern Personal Armor and an M10 Pattern Ballistic Helmet for protection, with a TNR Shoulder Lamp attachment for illumination. On his armor's chest plate, he had painted the phrase "THE BIRD", along with a wing emblem.[6][7] At one point prior to the Hadley's Hope mission, Crowe had an elaborate color portrait of his girlfriend printed on the rear of his armor, but Apone quickly made him remove it as he deemed it excessive even for the loose-knit squad of Marines he commanded.[8]

On Acheron, Crowe carried an M41A Pulse Rifle as his primary weapon. Like Dietrich, he carried a Heckler & Koch VP70 in a fabric holster on his right hip, which appeared to be attached with some rope. He also wore a watch on his left wrist.[9]

Crowe moments before his death.

Crowe's ECG at the moment of his death.

Wierzbowski, Crowe, Hicks and Hudson in the dropship.

Production still of Hicks and Crowe. 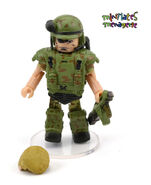