"What's the last thing you do remember?"
"I remember some horrible dream about smothering and..."
―Ripley and Kane (from Alien)

Suffered from a drug addiction
Host to the Alien

John Hurt
Gilbert Ward Kane,[2] better known as Thomas Kane,[5][6] was the executive officer aboard the commercial towing vehicle USCSS Nostromo. He was serving on the ship during its fateful voyage in 2122 when it encountered a Xenomorph on Acheron (LV-426), an incident that eventually led to the destruction of the ship and the loss of all but one of its human crew.

Kane was the crewmember who was attacked and impregnated by a Facehugger inside the derelict on LV-426, and as such it was he who brought the Alien aboard Nostromo. He died when the Chestburster erupted from his chest.

Thomas Kane was a star pupil throughout his early education, graduating with honors from Weatherly Private School before becoming top of his class at Gunning Foss Military School.[2] However, during his time studying medicine at Bryce-Watkins Medical University he developed an addiction to medication, eventually leading to an embolism that hospitalized him for 107 days. After being expelled from the university and with his plans to enter the medical profession ruined, Kane attended Wellington Academy in Suffolk, England, where he obtained a Masters in engineering and a GBUK pilot's license.[2]

Following this, Kane was posted as executive officer aboard the hospital ship UKMS Outreach, although while there his addiction resurfaced. He was relieved of his post, and though he was able to beat his addiction, he subsequently descended into alcoholism. Kane was transferred (despite ostensibly being promoted to captain) to UKCS Powell, a commercial towing vehicle, before serving as executive officer aboard USCSS Giler.[2] By the time of his posting to USCSS Nostromo, Kane had been clean for some time.

"The pit is completely enclosed. It's full of leathery objects, like... eggs or something."
―Kane, describing the derelict's cargo hold (from Alien)

When Nostromo landed on Acheron (LV-426) in response to a mysterious signal detected on the moon, Kane volunteered to be part of the team sent out in search of the signal's origin. Kane, Captain Arthur Dallas and Navigation Officer Joan Lambert soon tracked the signal to a derelict spacecraft. After discovering the fossilized remains of the derelict's pilot, Kane elected to investigate a lower area, accessible through a hole burned in the floor. As the others lowered him down, Kane found himself in a huge, cavernous chamber filled with what looked like eggs.

As Kane investigated further, he slipped and fell into one of the numerous shallow pits in the chamber's floor, disrupting a blue mist suspended above the eggs as he did so. One of these eggs opened as he was inspecting it, and as he peered incautiously inside a Facehugger leapt out, burned its way inside his helmet and subdued him. Dallas and Lambert carried the comatose Kane back to Nostromo, gaining access despite Warrant Officer Ellen Ripley's refusal to breach quarantine procedure.

"First thing that I'm going to do when I get back is to get some decent food!"
―Kane, shortly before his death (from Alien)

Brief attempts to remove the Facehugger failed, although the parasite later detached by itself and subsequently died. Kane awoke from his coma apparently unscathed but incredibly thirsty. He described how he suffered from a nightmare involving smothering, much to the bemusement of the crew. Before returning to stasis, Kane and the others elected to eat one final meal. While they ate, Kane began choking, before violently convulsing and collapsing on the table. As the rest of the crew attempted to restrain him, the Chestburster inside him emerged, gruesomely killing Kane and quickly escaping the mess hall.

After his death, the crew held a short funeral for Kane before they jettisoned his remains into space.

"Kane was less controlled in thought and action than was Dallas, and possessed far less imagination. He was a good executive officer. Never would he be a captain. That requires a certain drive coupled with the ability to command others, neither of which Kane had been blessed with."
―Alien novelization, chapter 1

Kane was a likeable and approachable individual who seemingly got along with every other member of the Nostromo crew, a quality that made his ultimate gruesome death all the more saddening for them. He was a capable second officer but lacked the authority to make a captain.[7]

Kane's dossier noted him as being an "idealistic overachiever".[2]

During his time exploring the derelict, Kane armed himself with an RXF-M5 EVA Pistol for self defense, although he did not have enough time to fire it when he was attacked by the Facehugger. 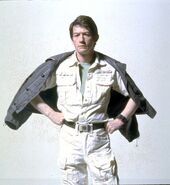 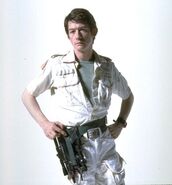 Kane with an RXF-M5 holstered on his belt. 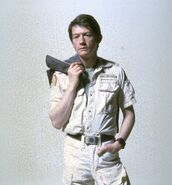 Kane studying an Ovomorph shortly before the Facehugger attacks him.

Kane as he appeared in Alien: The Illustrated Story. 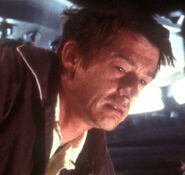 Jon Finch as Kane before he dropped out.[12] 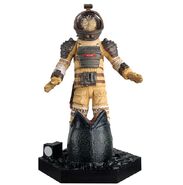 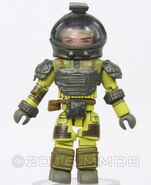