"Alien life form. Looks like it's been dead a long time. Fossilized. Looks like it's growing out of the chair. Bones are bent outward, like he exploded from inside."
―Dallas, regarding The Pilot (from Alien)

The Pilot, sometimes referred to as the "Space Jockey",[3][4] was an Engineer who piloted the spacecraft that crashed on LV-426. It was killed by a Chestburster,[5] although what happened to the resultant creature is not known. The Pilot's body was discovered an indeterminate period of time later by the crew of the USCSS Nostromo.

At an unknown time period, the Pilot's ship crash-landed on LV-426. The reasons behind this crash are not known. However, the ship was carrying a large cargo of Xenomorph Eggs, and at or around time of the crash the Pilot was impregnated with a Chestburster; it is possible this event played some role in the crash itself. The Pilot later activated a warning beacon in an attempt to prevent anyone else from stumbling across his ship and its deadly cargo, before being killed when the Chestburster inside it hatched as it sat in the vessel's cockpit.[1]

It is unknown if the Pilot was the sole crew member aboard the derelict ship. However, Thomas Kane theorized that the openings the Nostromo crew members used to enter the ship were in fact airlocks, possibly left open following an emergency evacuation of the ship.[6]

The Pilot's fossilized remains were later found by the crew of the Nostromo and the USCSS Anesidora, in 2122 and 2137, respectively, who were both ironically lured to the site by the very beacon that was supposed to keep them away. While the Nostromo crew left it on, the Anesidora crew shut off the beacon.

Later still, the Origin Facility was set up around the Pilot's ship by Weyland-Yutani, who began studying Xenomorphs created from the Eggs found on board. It seems the Pilot's body itself was also the subject of intense research.

The Pilot and his chair in Alien were built around a steel and wood frame, shaped using ribbed tubing, plastic and Styrofoam molds and plaster.[7] The entire piece was 26 feet tall when completed, and mounted on a swivel so that it could be quickly rotated to capture different camera angles.[7] The set walls, minus the Pilot chair, later doubled for the walls of the Egg chamber that Kane is lowered into.[7]

The Pilot very nearly did not make it into the film at all. As production costs continued to mount, 20th Century Fox pressured Ridley Scott to scrap the large Pilot set altogether, complaining that it would be very expensive to build and yet would only feature in one brief scene. However, Scott insisted it was an important part of the film, necessary to elevate the picture above lowly b-movie status, and the studio eventually relented.[1] For some shots in the scene featuring the Pilot, the Nostromo crew members were actually played by children, namely Scott's sons Jake and Luke and cinematographer Derek Vanlint's son, in order to make the set appear even larger than it was.

When James Cameron began writing the sequel Aliens, he initially planned to have the Pilot return, although the entire scene featuring the character was dropped before filming (likely for the same budgetary reasons that almost caused the Pilot's appearance to be cut from Alien). Originally, a rescue team sent out in response to Anne Jorden's distress call from the derelict (seen in the extended Special Edition of the film) would enter the ship and find the Pilot, now partially buried by volcanic debris, before going on to discover the Egg chamber and being swarmed by Facehuggers.[8]

The Pilot was also a major character in Jon Spaihts' original script for Prometheus, titled Alien: Engineers, which was intended to be a direct prequel to Alien. In this script, the Pilot is revived by David aboard the Juggernaut and attempts to carry out his mission to unleash the Xenomorphs upon Earth. However, he is killed by a Chestburster as he attempts to leave LV-426. The ship then crashes on the moon, setting up the events of Alien.[9] The Jockey-Xenomorph born from the Pilot, hinted at in Alien, subsequently features as an antagonist. However, when the script for Prometheus was changed to remove the Xenomorphs and take place on LV-223, the Pilot character eventually became the Last Engineer.

The Pilot on the front cover of Prometheus to Alien: The Evolution

The Pilot from Alien: The Illustrated Story.

The Pilot as seen in Aliens: Earth War.

The Pilot as seen in the video game Alien Trilogy

The Pilot as seen in Aliens: Colonial Marines

The Pilot as seen in Alien: Isolation

The Pilot as seen in Aliens: Infestation 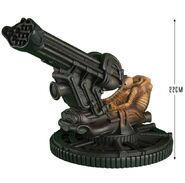 Eaglemoss Collections figurine of the Pilot. 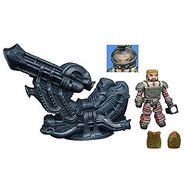 Minimates Space Jockey set 2.
Add a photo to this gallery

A close-up of Necronom V, the inspiration for the Pilot's design.

Concept art of the Pilot

Behind the scenes photo of H. R. Giger with the Pilot model

Giger on set with the Pilot.

The Pilot at the film's premier.

"Ridleygram" of the Pilot in its cockpit.
Add a photo to this gallery

Retrieved from "https://avp.fandom.com/wiki/The_Pilot_(Engineer)?oldid=256750"
Community content is available under CC-BY-SA unless otherwise noted.