"End this affront to our ancestry! Slay the Abomination!"
―Spartan, regarding The Abomination (from Aliens vs. Predator)

The Abomination was a Predalien that was born on BG-386.

The Abomination was spawned when Specimen 6 defeated Wolf in the Yautja ruins on the planet and allowed the Predator to be impregnated by a Facehugger. Once fully grown, the Abomination began stalking and killing the human colonists of Freya's Prospect and the Colonial Marines dispatched to the planet. It was later discovered by another Elite Predator, Dark, who made it his mission to kill the creature at any cost.

"Weaken and then harvest the Elite Predator."
―The Matriarch, to Specimen 6 (from Aliens vs. Predator)

When the Xenomorph outbreak on BG-386 and the subsequent Colonial Marine intervention overwhelmed the Young Blood Pack, several members of the Elite Clan were dispatched to investigate the disappearance of the Yautja. One of these Elites, known as Wolf, engaged the Xenomorph Warrior known as Specimen 6 in an ancient combat arena on the planet, after the Warrior had killed two of the Young Bloods there. After a struggle, Wolf was defeated, but rather than killing the wounded Predator, Six removed his bio-helmet and allowed a Facehugger to latch onto the hapless Predator's head. The Chestburster it implanted would later hatch and quickly grow into the Abomination.

"See the size of that thing?! What WAS that?"
―Unidentified Marine, after encountering The Abomination (from Aliens vs. Predator)

The Abomination soon began attacking the human colonists of Freya's Prospect, as well as the Colonial Marines deployed to the planet, collecting trophies from many of its victims. Its extensive rampage eventually caught the attention of Dark, another of the Elites searching for the Young Bloods on the planet. Through his sighting of the creature, Dark's clan leader, Spartan, learned of its existence. Once Dark's mission to locate and recover all the missing Yautja technology on the planet was complete, Spartan ordered him to find and destroy the Abomination at any cost, calling the creature an affront to their very ancestry.

Finally, the Abomination came face-to-face with Dark inside the Yautja Pyramid beneath the surface of BG-386, in a large underground arena flooded with molten lava. In a titanic duel, during which the Abomination even attempted to bring down the very Pyramid itself, Dark emerged triumphant and dragged the Abomination's corpse to the roof of the research facility above the Pyramid, roaring in triumph as he threw the dead Predalien to the ground, mimicking the way in which his ancestor, Lord, had celebrated the first ever victory over the Xenomorphs.

As with all Predaliens, the Abomination displayed strength and resilience far beyond any common Xenomorph strain; it was even able to survive submerged in magma for a short while, and its skin was durable enough to resist a blast from a plasma caster near point-blank without any visible damage.[2] In appearance, it was far more Warrior-like than other Predaliens previously encountered, with Predator features essentially limited to the creature's head, which was oval-shaped, showing a cross between the elongated cranium of the Alien and more human-shaped Predator head. Its body, while similar to a Drone's or Warrior's, was more bulky, suggesting increased strength and durability. The creature possessed dreadlocks, although they were fairly small and more numerous than often seen. The Abomination also possessed an inner jaw, unlike some Predaliens.

Unlike most other Xenomorphs, the Abomination typically moved by jumping rather than walking or running, bounding from spot to spot in great leaps.[2] It had a distinctive roar, more akin to the deep cries of a Yautja than the wailing screeches of other Xenomorphs. The Abomination also displayed notable Yautja behavior, including a habit of ripping the skull and spine out of humans. 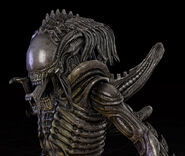 Closeup of the Abomination. 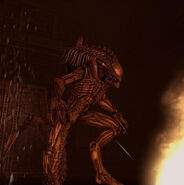 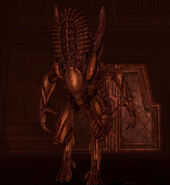 Charging at its prey.

The Abomination leaping in the jungle ruins.

The Abomination is killed by Dark.
Add a photo to this gallery

Retrieved from "https://avp.fandom.com/wiki/The_Abomination?oldid=245504"
Community content is available under CC-BY-SA unless otherwise noted.