Tennessee Faris,[2] better known as "Tee",[3] was the pilot of the colonization spacecraft Covenant. He was the husband of Maggie Faris. He was serving on the Covenant during its disastrous voyage to Planet 4, during which it suffered several catastrophes that resulted in the loss of its crew and its hijacking by David.

Tennessee was the first of the Covenant's crew members to intercept the transmission that subsequently lured them to Planet 4. He was also one of only two crew members to survive the incident, alongside Daniels. However, they were captured by David when he hijacked the Covenant, presumably to be used in his future experimentation.

Tennessee hails from Lynchburg, Virginia and while proud of his hometown, he is excited to be colonizing a new world in outer space. He has a younger brother who has a family on Earth; of whom he misses. Tennessee was arrested thrice in his youth for minor offenses. His other notable behaviors were stealing a vehicle and punching a police horse on St. Patrick's Day. At some point he met and married his wife, Faris, presumably when they were learning to become pilots. The two eventually applied for positions on a crew to colonize Origae-6 with the Weyland-Yutani Corporation, conveniently omitting their past legal transgressions. Tennessee also enjoys the music of John Denver. 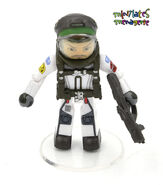 Minimates figure of Tennessee.
Add a photo to this gallery

Retrieved from "https://avp.fandom.com/wiki/Tennessee_%22Tee%22_Faris?oldid=247302"
Community content is available under CC-BY-SA unless otherwise noted.