Jan-June 1996
Tarzan versus Predator: At the Earth's Core is a four-issue limited crossover comic book series that was first published by Dark Horse Comics from January-June 1996. It was written by Walter Simonson, illustrated by Lee Weeks, colored by Perry McNamee, lettered by Pat Brosseau and Vickie Williams, and edited by Mike Richardson and Peet Janes, with cover art by Weeks.

In the overall Dark Horse crossover comics line, Tarzan versus Predator: At the Earth's Core was preceded by Superman vs. Aliens, Agents of Law #6 and X: Hell Night, and was followed by Batman/Aliens.

#1: In the center of the earth lies Pellucidar, the last bastion of primeval forest in the world. To Tarzan, Lord of the Jungle, this is sacred ground. But to the Predators, it is hunting ground. Dark Horse Comics is proud to present Tarzan vs. Predator at the Earth's Core, by Walter Simonson and Lee Weeks. When Tarzan receives word that Pellucidar's greatest warriors and strongest beasts are being killed, and his friend David Innes, ruler of Pellucidar, has gone missing, there is no question that he must travel to the earth's core to investigate. The people of Pellucidar rest a little easier, knowing that their protector is coming. And in this land of eternal noonday sun, the Predators rest up for their greatest challenge yet!

#2: Something is killing Pellucidar's greatest warriors, and Tarzan of the Apes will not rest until he has discovered the cause. Tarzan's hunt takes him deep into the earth's core, the very heart of the lost land of Pellucidar, where he finds himself the quarry of a strange group of beings: the trophy-hunting Predators! Unfortunately for the Predators, their code of hunting is a language the savage Lord Greystoke understands all too well.

#3: When they hunted his friends like wild animals, when they savaged his sacred land of Pellucidar, these outsiders... these Predators... started a fight. But when they ravaged Jane, they started a war. From the ruins of an ancient Mahar city comes a bellowing cry that echoes through the jungle. Tarzan is on the hunt, and God help his prey.

#4: "The Ancient of Days" is the last of her kind — a winged sauroid with powerful telepathic abilities. Her race, the Mahar, once ruled the sacred city of Pellucidar from on high, until they fell so low that they could no longer survive let alone maintain control of the natives. Now, as Tarzan seeks to rid the ancient jungle city of an invading band of Predators, this Mahar sees an opportunity for the sauroids to rule again — an opportunity for her to take control of Pellucidar. It's just a matter of playing one side against the other... a very small matter for such a powerful telepath. Join Tarzan, the Predators, and virtually every inhabitant of the interior world's steaming jungles for a climactic, free-for-all battle that will shake the world to its fiery foundations!

Tarzan versus Predator: At the Earth's Core was collected in a trade paperback edition released in October 1997, edited by Lynn Adair and featuring a new cover by painter Kilian Plunkett.

A famed comic book artist in his own right, series writer Walter Simonson was actually the artist behind the very first Alien comic ever produced, the 1979 adaptation of the first Alien film produced by Heavy Metal magazine, entitled Alien: The Illustrated Story.

Series artist Lee Weeks is well known for his work at Marvel and DC Comics on various characters.

Series editor Mike Richardson is also the founder and publisher of Dark Horse Comics, while co-editor Peet Janes worked primarily as an editor on Dark Horse's successful Tarzan and Star Wars lines throughout the 1990s.

Trade paperback edition cover artist Kilian Plunkett is a veteran Aliens artist who worked as illustrator on the critically acclaimed Aliens: Labyrinth and as cover artist on Aliens: Frenzy.

Edgar Rice Burroughs' creation Tarzan: Lord of the Apes is actually another Dark Horse-licensed property and so this cross-over series required no outsider publisher involvement. Dark Horse would later go on to produce other cross-overs between Tarzan and Batman, and between Tarzan and Superman, both owned by DC Comics.

This series' name is a reference to an original book by Edgar Rice Burroughs entitled Tarzan at the Earth's Core, which was both the fourth book of his Pellucidar series and the thirteenth book in the Tarzan series. Published in 1930, it was a very early instance of a commercial crossover.

Cover to Tarzan versus Predator: At the Earth's Core issue 1 by Lee Weeks 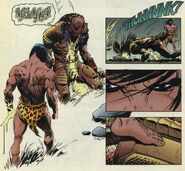 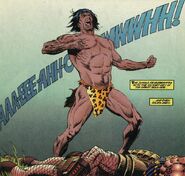