The TNR Shoulder Lamp,[2] also known as the Personal Light Unit[3] or simply the flashlight, was a high-powered torch[2] issued to combat personnel in the United States Colonial Marine Corps.[4] It was typically attached to the Marines' M3 Pattern Personal Armor, although it could also be used as a handheld unit.[4]

The TNR lamp was powered by a rechargeable internal battery[2] and its high-powered halogen white-light bulb was mounted on a moveable neck.[5][6][7][1]

The unit was typically[4][7][6] mounted on a dedicated bracket fitted on the rear left shoulder of the standard M3 Pattern Personal Armor, although it was also fitted with a carrying handle to allow it to be easily detached and used as a handheld torch.[2][4] The M56 combat harness used in conjunction with the M56 Smartgun was also capable of mounting the TNR on a plate extending from its left shoulder.[4][7]

The variant used by the crew of the USS Sulaco in 2179 featured a black neck and handle, but a green body.[1][8] It also featured a grill on the side of the body that faces the Marine's armor when it was worn, a black wire leading from the body, up the neck and into the bottom of the bulb's housing and another, longer black wire that came out of the bottom of the unit's body[5][1] and lead inside the Marines' M3 via the left arm hole.[4]

While very similar, unlike the Sulaco crew's variant, the TNR used by the crew of the USS Sephora in 2179 had a green neck. Also, the wire leading into the lamp housing was white, instead of black, and the wire coming from the bottom of the body was removed. The arm and handle also differed slightly.[7]

The variant used by the crew of the USS Marlow differed significantly from the variant used by the Sulaco and Sephora crews. Its design, while still maintaining the same basic shape (and handle) as the previous two variants, was completely different. Additionally, it featured a remote neck, which was connected to the Marine's Ballistic Helmet and automatically moved the light beam to match the direction in which the Marine was looking, and another handle on the bottom of its body.[6]

In Aliens, the TNR Shoulder Lamp's main body is made from a Superswitch Intruder Alarm (catalogue number 6000) made by UK company Superswitch Electrical Appliances Ltd.;[8] these same alarms can be seen in their original form as door switches in the Hadley's Hope set.[8][4] For the lamp props, the keypad was removed and replaced with a plasticard panel,[8] the section with the alarm's sensor was removed and 2 plates were added to the back, with 1 covering a lowered section with information on Superswitch and the other covering a section with a tamper switch and the screw to access the battery compartment.

A handle from a Technisub La Spirotechnique diving lamp[9] (which can be seen in the hands of the deep space salvage team leader at the beginning of the film) was also added to the alarm, along with an arm from a portable video camera which, according to Terry Reed, was of German origin (according to Alien prop collector Harry Harris' website, it looks "remarkably like a lamp from the 'Reportalight' range").[8]

The lamp itself is a Reflecta video lighting lamp model 3002. The lamps were able to operate from both internal Ni-Cad rechargeable batteries or an external 12V power supply. In some costume continuity Polaroids, a long black coiled lead can clearly be seen. According to Del Bennett (who was responsible for the practical lighting on Aliens), the battery versions were only able to give about 20 minutes of light before needing to be recharged. This would indicate that multiples of the lamps were made, perhaps along the same lines as the armor costumes at three sets per character.[8]

According to 1st unit call sheet No. 2, there were 14 lamps total used at the Acton filming location on October 1, 1985; there were 5 250w lamps on set, while the other 9 were operated with rechargeable batteries.[10]

Hudson holding his TNR. Note the door switch in the background, which like the TNR, is based on the Superswitch Intruder Alarm.

The NECA Private Hudson figure with and without his TNR.

The TNR Shoulder Lamp as it appears in Aliens vs. Predator.
Add a photo to this gallery 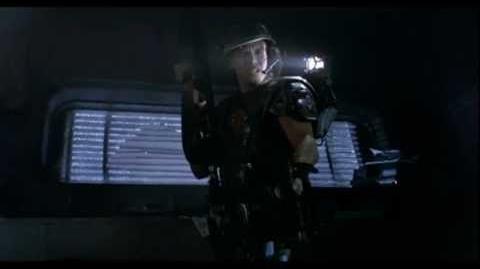 Retrieved from "https://avp.fandom.com/wiki/TNR_Shoulder_Lamp?oldid=256568"
Community content is available under CC-BY-SA unless otherwise noted.