Sydney Jay "Syd" Mead (July 18, 1933 – December 30, 2019) was an Academy Award-nominated American "visual futurist" and conceptual artist who served as a concept artist on the 1986 film Aliens. He is best known for his designs for science-fiction films such as Blade Runner, Aliens and Tron. Of his work, Mead was once moved to comment: "I've called science fiction 'reality ahead of schedule'."[1]

With principal photography for Aliens closing in James Cameron still had nothing designed late in the film's pre-production. With nothing designed meant that the storyboards and building work of any kind could not be started. Cameron needed to enlist someone who could not only bring his ideas to life but could also get the job done fast. Two people instantly sprang to mind and enlisted the talented artists Ron Cobb and Syd Mead. Syd Mead did futuristic designs for such films as Star Trek: The Motion Picture, Tron, 2010 and Blade Runner.

Cameron started the task of tracking Mead down. Contacting Mead's office, Cameron was told he was in Florida. Mead was one of the 12 judges of the miss USA contest when he received the call from James Cameron. Cameron explained he was going to Fed Ex a copy of the script to him and asked if he'd read it and tell him if he'd like to do some design work for the production. Once the script arrived Syd Mead began reading sitting until 4 am thinking it was a good story and was impressed with Cameron's writing.

"Syd is very thorough when it comes to designing things that can actually be constructed and work - that's his background - so I thought I'd let him handle the cutting edge technology, which I envisioned as being primarily the military stuff."
―James Cameron, Cinefex #27 -- © 1986 Don Shay

Calling Cameron back Mead told Cameron how he couldn't stop reading the script and how much he was impressed with the overall story. Arriving in Hollywood Mead, having done some early sketches of the Sulaco on the plane, went to visit Cameron at his home on Mulholland for a meeting where Cameron showed him his drawings of the Queen Alien and the Alien's environment. The design department was split into three creative areas. Cameron was to do the Alien elements. Cobb was to do the earth colony architecture, tunnels, doors and colony vehicles. Mead was to concentrate on anything connected with the military vessel the Sulaco.

To envision what the Sulaco might look like Mead took the POV notes from the script which said that we first see a forest of antenna move across the frame followed by the bulk of the Sulaco. With this description, Mead began to interpret the look for the vessel as a melon shaped hexagonal craft with lots of antennas at the front. Mead also pictured this version of the craft opening up like an umbrella when loading cargo or refueling.

Mead also had in his mind the craft being powered by a large fusion sphere and incorporated this into the next two designs.

However, Cameron didn't like any of these concepts due to camera/focus reasons and so Mead had to rethink his design. Cameron wanted a streamlined type of craft with a militaristic look and made a sketch of what he had in mind for Mead to work with.

Armed with Cameron's sketch Mead went to work borrowing shapes from old battleships and aircraft carriers and began to stack and incorporate these shapes into the new flattened blade-like design.

"The idea was that it was a military load-carrying vessel - an enormous space freighter, if you will...Down the side of the side of the ship I put a long row of enormous roll-up doors in big, over-engineered heavy frames so that as the thing moves by very slowly you can see all the elaborate detail and the loading bays."
―Syd Mead, Cinefex #27 -- © 1986 Don Shay

"Everything was a long, flat oblong cross-section with antennas on the front and the big fusion reactor at the rear.  Very articulated.  Lots of ins and outs and deep shadow areas, which photographs nice.  There were huge, long-range guns and a mechanical idea down the side which is like a freighter with a built-in crane system, which slides down the entire length of all the storage bays.  It had a nice mechanical veracity to it."
―Syd Mead, The Aliens Story -- © 1988 James Van Hise

Once Cameron was satisfied with the new Sulaco design Mead started work on designing the interior the craft.

When designing the dropship Mead pictured a craft that was similar to the heavy-lift helicopters used by the U.S marine Corp . At the time, Mead had designed a luxury insert carriage for such a helicopter for the King of Saudi Arabia and at one stage visited the El Toro marine base to take a look inside the massive interior of the helicopters at the base.

Mead's version of the dropship had weapon pod arms that would unfold similar to a scorpion's tail and would fire as the craft made its landing. For the crafts ground attack, Mead had pictured the dropship having treads which, in his mind, gave the craft better mobility.

"This dropship was supposed to be able to literally drop through whatever atmosphere this planet has, land on the surface in a sort of running/skidding touchdown  I had huge pods which could unfold like a scorpion's tail so that you could be firing as you came in and clear the way for this assault...It had a big tract mechanism pod near the rear to come in a mush angle.  The tracts would hit down and the front would slam down on multiple wheel landing gear and then the ramp would drop and the assault tractor come out.  Then it just takes off again"
―Syd Mead, The Aliens Story -- © 1988 James Van Hise

For the Power Loader, Mead drew a headless gorilla-like articulated exoskeleton with the pilot based where the head should be.

While Mead was sketching the design for the Power Loader, the crew over at Pinewood studios had made a full-size mock-up of a Power Loader. Because the mock up worked so well Cameron decided to go with that design. The final design was based on sketches done by James Cameron.

Later, Mead was asked to sketch some ideas for Gateway Five (station) as Ron Cobb was no longer involved on the production. He pictured a three-dimensional hexagonal structure, Mead then began a quick design and faxed the design over to Pinewood. However, this design was never used, and that was his last involvement in the production. Peter Lamont did the final design for Gateway Station.

After the films theatrical release, James Cameron contacted Mead and asked if he would draw a color perspective shot of the Sulaco to be used by the Academy Awards. 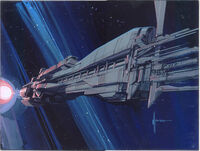 Aliens was nominated for visual effects, which it won. Because the footage of the Sulaco happens fast it couldn't be freeze framed as it would appear blurry. Once the tempura sketch was complete Mead sent it to Cameron's house.

A sketch of the Sulaco done by Mead.
Add a photo to this gallery

Retrieved from "https://avp.fandom.com/wiki/Syd_Mead?oldid=253675"
Community content is available under CC-BY-SA unless otherwise noted.