The Swimming Alien was a large Xenomorph that is at least primarily aquatic and was encountered by USCMC personnel on Bracken's World.

All Xenomorphs can swim, but since these Xenomorphs have no legs and only a lobster-like tail fan and three pairs of pleopods (swimming legs) to propel them, it can be said they swim better than their terrestrial cousins.

The upper half of the Swimming Aliens body is much like a standard Xenomorph, but the lower half of its body forms a large tail featuring a lobster-like tail fan instead of legs. The tail has three pairs of pleopods (swimming legs), though whether or not they are also capable of assisting with terrestrial locomotion is unknown.

The Alien itself appears to take on a blue color, hinting it may be of Drone rank, though that could simply further drive the point that the creature is marine based. The Swimming Alien has shorter dorsal tubes than the typical alien (excluding the Runner which has no tubes at all) and thin pieces of flesh hanging from its face, although these may or may not be whiskers.

It is possible that the aquatic Xenomorph is a type of Praetorian due to its large size and crested head, though because they are so numerous and only seen as attacking rather than defending territory, this could simply be the result of the Xenomorph DNA reflex adapting features from a large host species, or possibly even genetic modification.

Whilst the aquatic Xenomorph is likely spawned from large achelate (clawless) crustacean marine life indigenous to Bracken's World, it is also possible that it was genetically engineered by or at the behest of Ernst Kleist AKA 'Father', as he had previously been genetically engineering spliced Xenomorphs at Charon Base. 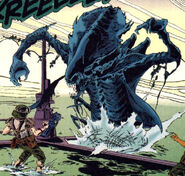 First encounter with the aquatic Xenomorphs.

A dropship arrives to rescue USCMC personnel fighting off aquatic Xenomorphs from the roof of an APC.

An ambush by both aquatic and standard Xenomorphs. 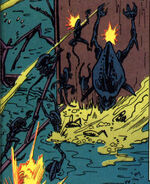 Aquatic and standard Xenormphs scaling the storm wall of Sector 1, the head crest and significant difference in size are indicators that the aquatic Xenomorphs may be Praetorians.

Aquatic Xenomorphs swimming with only their head at the surface of the water, in a similar fashion to crocodiles.
Add a photo to this gallery
Retrieved from "https://avp.fandom.com/wiki/Swimming_Alien?oldid=255779"
Community content is available under CC-BY-SA unless otherwise noted.