Mutated into a Hybrid

Susan Welles[1] was a Weyland-Yutani employee with the company's weapons division. Following the USS Sulaco's disastrous mission on Acheron, she and her colleague Kevin Fox were dispatched to redezvous with the ship at Anchorpoint Station and collect any viable Xenomorph material that may be aboard. When the samples instigated an outbreak on the station, the inhabitants found themselves trapped in a desperate fight for survival.

Welles became infected by the Xenomorph contagion in the lab accident that started the infestation, and later perished when she transformed into a Hybrid.

Welles and her colleague Kevin Fox arrive at Anchorpoint Station and meet with first officer Rosetti. They explain to him that they have arrived at the station to investigate a navigational error that the Sulaco had suffered, causing it to leer into UPP territory, and demand a full biohazard containment procedure on the ship. Rosetti notes that the two suspiciously departed from Gateway Station three days prior to the navigational error that caused the Sulaco to arrive in UPP territory, and he questions how they were able to leave early before the error had even occurred. Fox and Welles remain evasive. Rosetti accuses the two of deliberately sabotaging the Sulaco, and that their presence as military personnel, alongside the Sulaco incident, violates the Strategic Arms Reduction Treaty made between Weyland-Yutani and the UPP. Welles clarifies that the decision to re-route the Sulaco was made "at the top", with Fox adding that the ship contained "weapons-related material" and that the risk of UPP interference was necessary. He then informs Rosetti that they will be personally accompanying the biohazard team.

Fox, Welles and the team board the Sulaco. Whilst Fox, Tully and Spence investigate the hypersleep chambers containing Hicks, Newt and Ripley, Welles discovers the chestbursted corpse of UPP Commando captain Kurtz, and has the corpse bought back to Anchorpoints medlab where the two executives examine the body. By extracting DNA from Kurtz' body, the two are able to acquire several Xenomorph samples, growing them in containment tanks.

Later, in the station's eco-module, a now awakened Newt states that she would like to go to Africa. Welles responds that that can be arranged providing Newt cooperates under the circumstances they discussed, with Newt acknowledging "about not telling". Welles later tells Spence that Newt will undergo therapy at Gateway before returning to Earth to live with her grandparents in Oregon.

A UPP interceptor lands at the docking bay to drop off the now repaired Lance Bishop, who was previously seized by Kurtz's team. The group scan Bishop for any new circuitry and tampering and find nothing. Welles states that they should assume that the UPP have accessed his memories of the Xenomorph. Welles later visits Tully, examining the Alien sample in a containment tank, which is slowly growing into a miniature egg. Suddenly, a crack appears on one of the containment tanks and suddenly explodes, causing shock and Tulley and Welles to hit the floor. One of the samples implodes upon being released, causing a cloud of motes to be released into the air and prompting Tully to yell for the two to be sent to "de-con". The two are subsequently sent to the decontamination room to be washed off, and show no sign of infection afterward. Blaming Tully and Spence for the incident, Welles scornfully has them both removed from the project and has Bishop take over the lab in their place.

Putting Bishop in charge of the lab would prove to be a costly mistake. Knowing the Xenomorph was too dangerous to be delivered into the company's hands, the android secretly plots to terminate the samples, while at the same time the rest of the crew of Anchorpoint become aware of Welles and Fox's ploy to grow Xenomorph samples and plot to sabotage them. While Welles is absent, Hicks, Spence and the others infiltrate the medlab to destroy the samples just as Bishop is about to do the act himself, having intended to take full responsibility for the sabotage. Nevertheless they activate the command to dissolve the samples just as Welles returns to check on their progress. She rushes over to interfere, but is too late to prevent the samples from being completely eradicated.

With her plans ruined beyond any hope of salvaging, Welles lunges at Spence in a fit of rage, but the other woman manages to counter and punch her in the gut. Welles doubles over in pain, swearing revenge from both herself and the company as she unexpectedly begins to gruesomely mutate; the decontamination procedure she and Tully had taken had failed to remove the infection caused by the spores they'd inhaled. The crew watch in horror as Welles is torn apart from the inside by the fully-grown Xenomorph hybrid that had been gestating inside her, the remains of her face literally ripped away to reveal a unique hybrid with glowing red eyes. The creature casts off what remains of Welles and wreaks further havoc, unknowingly avenging its host by killing several survivors before being killed itself in a fight with another Xenomorph.

Even in terms of Weyland-Yutani personnel, Welles possessed an exceptionally cold, despondent demeanor around others. She was unsympathetic towards the other inhabitants of Anchorpoint and was clearly only focused on serving the company's interest, immoral or not. The one time she showed any strong emotion was when her company objective was foiled by Spence and the rest of the Anchorpoint crew, upon which she grew enraged enough to attack the former and promise retribution in the seconds before her infection destroyed her.

Welles and Tully getting decontaminated. 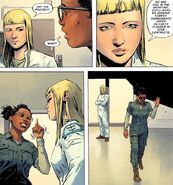 Retrieved from "https://avp.fandom.com/wiki/Susan_Welles?oldid=249050"
Community content is available under CC-BY-SA unless otherwise noted.