Aliens
Predator
Stanley "Stan" Winston (April 7, 1946 – June 15, 2008) was an Academy Award-winning American television and film special effects supervisor, makeup artist and director who designed the Predator creature, for the 1987 film Predator. His initial design has since been adapted, modified and re-envisioned by others (and himself) for the subsequent movies, video games and other media of the Predator and Alien vs. Predator franchise.

As well as designing the original Predator, Winston's effects studio provided the costume and animatronic effects for Predator, as well as the 1986 film Aliens and the 1990 film Predator 2. Other notable films Winston worked on include The Terminator (1984), Terminator 2: Judgement Day (1991), Batman Returns (1992), Jurassic Park (1993) and Iron Man (2008).

Winston passed away in 2008 after a lengthy battle with cancer. Following his death, numerous stars and celebrities paid tribute to him and his work, including Arnold Schwarzenegger, who made a public speech regarding Winston's passing, and director Jon Favreau, who dedicated his Spike TV Scream Award to Winston upon receiving the award for Best Sci-Fi Movie for Iron Man. Terminator Salvation begins and ends its credits with a dedication to Winston. After his death, his four lead supervisors (Shane Mahan, John Rosengrant, Alan Scott and Lindsay Macgowan) founded and built their own effects studio, Legacy Effects, aptly named to honor Winston's memory.

Winston is often cited as one of the greatest practical special effects artists in history, and contributed to several iconic blockbuster effects films, including the first four Terminator films (although the last, Terminator Salvation, was completed after his death) and the Universal Studios attraction T2 3-D: Battle Across Time, Batman Returns and the first three Jurassic Park films. His most notable creations include the Terminator endoskeleton and cyborg prosthetic effects for star Arnold Schwarzenegger in The Terminator, the full-size Queen animatronic in Aliens, the Jungle Hunter in Predator and the City Hunter in Predator 2, the liquid metal prosthetics used in Terminator 2: Judgement Day and the animatronic dinosaurs in the Jurassic Park series, including the full-size Tyrannosaurs rex. 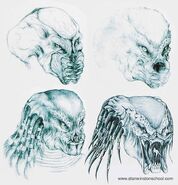 Predator concept art drawn by Stan Winston.[3]
Add a photo to this gallery

The "Dog Thing" from The Thing

The Alien Queen from Aliens

The Predator from Predator, as portrayed by Kevin Peter Hall

Gillman from The Monster Squad, as portrayed by Tom Woodruff, Jr.

Danny De Vito as the Penguin in Batman Returns

The T. rex from Jurassic Park

Robert Downey, Jr. as Tony Stark/Iron Man in Iron Man
Add a photo to this gallery

Retrieved from "https://avp.fandom.com/wiki/Stan_Winston?oldid=254265"
Community content is available under CC-BY-SA unless otherwise noted.