"No, Dr. Groves, I want it alive. I like this one."
―Karl Bishop Weyland, regarding Specimen 6 (from Aliens vs. Predator)

Hermaphroditic,[1] referred to as female

Specimen 6, also known as Number Six or Six for short, was a Xenomorph Drone (and eventual Praetorian and Queen) bred on BG-386 by Dr. Groves and his Weyland-Yutani research team. She was the first Xenomorph on the planet to successfully escape from its containment facility and she was directly responsible for the release of the Xenomorph Queen also held there, thereby triggering a large scale outbreak on the planet.

Bestowed with intelligence in excess of an average Drone, Specimen 6 was instrumental in the propagation of the Xenomorph infestation on BG-386, and in defeating an Elite Predator was directly responsible for the creation of the BG-386 Predalien. She was later recaptured by Weyland-Yutani, only to escape again and exact revenge on Dr. Groves.

Specimen 6 was birthed in a controlled environment at the Weyland-Yutani research facility on BG-386 by Dr. Groves and his team. Having gestated inside a human host (a restrained technician), she was born directly into a containment tube, just like the other Chestbursters that had been collected at the facility. However, when scientists entered the room to retrieve the creatures, she burrowed back inside her host's chest and emerged from the man's mouth to escape captivity. Dr. Groves promptly activated the emergency coolant systems in the room, killing the scientists and subduing Specimen 6, but the infant Xenomorph was spared at Karl Bishop Weyland's insistence, who was impressed with her intelligence.

Six was placed in a secure harness and branded with the number "6" on her forehead. Over time, she developed to maturity and was subjected to numerous tests by Weyland-Yutani designed to explore her lethality (including being allowed to kill technicians and an armed security guard) all whilst Groves taunted the creature in captivity. During one such test, Six heard the call of the captured Matriarch and attempted to escape through the vents, but was gassed into unconsciousness and recaptured shortly afterward.

"All facility staff, this is Dr. Groves. We have experienced a containment breach. Try to stay calm and follow procedures. I assure you, everything will be alright."
―Groves, during the Xenomorph outbreak (from Aliens vs. Predator)

When Weyland finally opened the Yautja Pyramid located beneath the research facility, a powerful electromagnetic pulse was unleashed, shutting down all power in the research complex and consequently allowing Six to again slip out of her restraints. She immediately escaped into the facility's ventilation ducts and quickly freed more of her siblings from another nearby holding facility, before the Xenomorphs moved to the large lab where the Matriarch was being stored, seeking to free her. Six killed the guards and shut down the power to the Matriarch's restraints, before opening the main tramline doors, allowing her and the other Xenomorphs to escape into the jungle before Weyland-Yutani could respond.

The Xenomorphs made their way to the nearby Freya's Prospect colony, where the Matriarch set up her Hive within the ore refinery. Six and the other Drones moved into the colony itself to harvest the colonists and eliminate the security forces there. A force of Colonial Marines soon arrived on the planet to combat the rapidly spreading infestation, and Six encountered soldiers armed with M260B Flamethrowers in the sewers beneath the colony complex.

With the colony's residents all used as hosts for more Xenomorphs, Six moved into the surrounding jungles, sabotaging the Marines' communications network and infiltrating a Marine outpost there to slaughter those inside. While a group of Marines managed to successfully trap her inside one of the office units, she smashed the lights in the room and hid in the shadows, escaping when the Marines moved in to investigate. Inside the outpost's command bunker, she harvested more civilians and manipulated the controls to the rear gate to make her escape. Acting on the Matriarch's orders, she next made her way to the ancient Yautja ruins on the planet where it encountered and defeated several Weyland-Yutani combat androids guarding the entrance to the Pyramid.

With the androids destroyed, Six and several of her siblings were set upon by two Young Blood Yautja in an ancient combat arena and a brutal battle ensued. By stealth and guile, she killed both Predators, an act that caught the attention of Wolf, a Yautja Elite. Six and Wolf fought in single combat, the latter seeming to have the upper hand for most of the fight. However, the Yautja somehow managed to knock Six in the head, stunning her. Weakened, she fell to the ground, but she was merely playing dead, allowing the arrogant enemy to get close enough for her to launch a surprise attack with its tail, impaling him. Collapsed and at Six's mercy, Wolf was rendered defenseless as she removed his bio-helmet and pinned it down. A Facehugger consequently latched onto his head and impregnated him as Six screeched in triumph.

"No, don't kill it. This one's an old friend."
―Karl Bishop Weyland, upon finding Six paralyzed (from Aliens vs. Predator)

Knowing that the Predalien would soon emerge, Six gave a cry of victory before heading back towards the Hive. However, en route to her destination, she was overcome by neural pain as the Matriarch was slain (killed by Rookie) in the refinery. The crippled Drone, paralyzed by pain, was subsequently captured by combat androids under Weyland's orders, and was taken to an orbiting starship for further study.

Sometime later, Six had escaped once more, evolved into a Praetorian, built a new Hive and successfully cocooned Dr. Groves. With her nest established, she had evolved into a new Queen and gave a monstrous roar of victory.

Specimen 6 was the sixth Xenomorph to be bred by Dr. Groves and his team at the Weyland-Yutani research facility on BG-386. Shortly after birth, she had the number "6" branded into the front of her head. She at first appeared to be a normal Drone with physical traits typical of the caste, but she later evolved into a Praetorian and later still a Queen. In becoming a Queen, she shed her original carapace and lost the number branded into her head.

Six exhibited physical behavior typical of a Xenomorph, particularly with regards to her unquestioning servitude to the Matriarch. She was capable of moving quickly across walls, floors and ceilings with equal ease, and could leap large distances to rapidly attack prey. Her combat abilities were advanced, as seen when she successfully defeated several Predators, one single-handed. In this regard, she seemed to resemble Grid, who terminated two Predators, unaided, in the pyramid on Antarctica.

"Number Six... I remember this one. Mr. Weyland thinks there might be something special about it..."
―Groves, about to commence tests on Specimen 6 (from Aliens vs. Predator)

Even at the time of her birth, Specimen 6 displayed intelligence that was above average in most other Drones, burrowing back into her host to avoid capture after hatching and emerging from the chest cavity into a container.

As an adult, she frequently displayed advanced situational awareness in excess of an average Drone, often cutting power to vital systems, destroying light sources to lure or disorient her enemies and give her an advantage in combat. Later, during testing in the research lab, Dr. Groves commented that Six's tactic of displaying caution to armed and dangerous humans is a "strong indicator of intelligence". He also took note of Six's tactic of destroying lights, wondering if this was a "new stratagem"; this would suggest a considerable amount of creativity on the prodigy Xenomorph's part. Six was also highly strategic, capable of waiting for her adversaries to separate themselves before killing them one by one.

It is not clear whether Six's intelligence was a precursor to her ultimate transformation into a Queen, or whether her heightened intellect merely ensured her survival until such a point as she evolved into a higher caste.

Specimen 6 emerging from the mouth of its host. 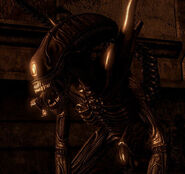 Specimen 6 in the Colony.

Specimen 6 molts into a Queen.

Specimen 6 as a Queen.

Specimen 6 from the view of a Predator.

Six's shadow, seemingly showing the outline of a Praetorian. 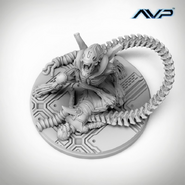 Prodos Games figure of Specimen 6.
Add a photo to this gallery

Retrieved from "https://avp.fandom.com/wiki/Specimen_6?oldid=257153"
Community content is available under CC-BY-SA unless otherwise noted.