Yautja
The Speargun[1][2] is a Yautja projectile weapon that launches a spike of razor-sharp metal at a target. These projectiles are fast-moving, and are often launched with enough force to shatter stone.

Unlike many Yautja weapons, which typically adhere to a single design with little variation beyond personal tastes, many different models of Speargun have been seen. These range from gauntlet-mounted devices[3] to handheld, pistol-like weapons[2] to full size rifles.[1]

Regardless of the exact form of the weapon, all Spearguns serve as projectile weapons firing metal spears. How these projectiles are fired is not clear, as the weapon produces no discernible muzzle flash and often little noise, yet fires spears with tremendous velocity and accuracy. Regardless of physical appearance, the Speargun is long-ranged and very powerful, capable of pinning victims to solid surfaces like a nail gun.[4] Some have been seen with integrated computerized scopes further increasing their range.[2] A common tactic, particularly with young and inexperienced hunters, is to use the Netgun to immobilize prey before finishing it off with the Speargun.

Despite the weapon's name, the projectiles fired by the Speargun are not typically spear-shaped; the most common form seems to be a U-shaped projectile with a weighted tail and two serrated prongs pointing forwards.[3] They are made from an unknown metal that is incredibly lightweight yet able to cut like hardened steel.[3] They spears often have a blood groove down the middle, designed to cause a target to bleed out if they become stuck in the flesh. Occasionally the projectiles themselves are also equipped with their own Cloak.[4]

Used by the Stalker in Aliens versus Predator: Extinction, this modified version of the Speargun fires spears that cause the target to, as the name implies, bleed internally. This causes humans to become increasingly slow and ineffective in combat.[5] However, this doesn't apply to Xenomorphs, who seem to have greater resistance to its effects.

The Bleeder Speargun is much like a harpoon gun, rifle and bazooka mixed together. It fires a large number of small spear tip darts.

Although still named the speargun in game, the rifle variant is used in Aliens versus Predator and Aliens versus Predator 2. This powerful speargun can fire a sharp spear at velocity so extreme that it can decapitate a human. The spear rifle has a telescopic scope attached to the top rail of the weapon and is used like a sniper rifle by the Yautja. The weapon can also retract and extend to decrease dimension so it can be carried easily by the shooter. 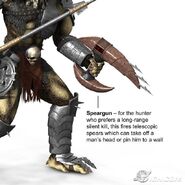 Promotional render of the Speargun from the video game Predator: Concrete Jungle.

The Speargun in Aliens versus Predator 2.

"Spear Rifle" concept art for Aliens versus Predator 2.
Add a photo to this gallery

Retrieved from "https://avp.fandom.com/wiki/Speargun?oldid=256427"
Community content is available under CC-BY-SA unless otherwise noted.