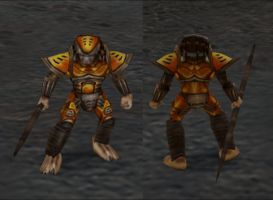 A Spear Master was a respected title held by certain members of the Yautja race.

This rank made these hunters specialize in the use of the spear weapon known as the Combistaff. They were recognized in their society for their use of superior combat agility, mental focus and dedication to their craft. They wielded their weapon with sublime grace that seemed impossible in the imperfect world of practical reality. They were capable of keeping a single enemy at bay with ease for an indefinite period. A Spear Master was able to send a horde of enemies hurling backwards with a single blow or assassinate prey with a surprise single well placed perfect impalement method.

More skilled members also enhanced their lightning reflexes similar to the Brawler. They were also given the right to wear the golden-like Phoenix armor, to help them survive against the acid of an alien.

When you upgrade a Spear Master they gain a spear with Plasmic Glow around it called the Plasma Glaive.

Spear Masters seen in hunts are normally equipped with around 10 Combistaffs all with different devices and "upgrades." Spear masters only participated in hunts vital to their entertainment or training. Spear Masters stalked their prey with precise and unheard movement. Spear Masters used their brilliant thinking and unmatched skill to impale their victim onto a wall or roof for all to see. Xenomorphs are seen as simple prey for the Spear Masters but even the slighest mistake would result in the Spear Master's demise.

Retrieved from "https://avp.fandom.com/wiki/Spear_Master?oldid=177466"
Community content is available under CC-BY-SA unless otherwise noted.