The Sound Cannon is a directional ultrasound weapon for use against the species Xenomorph XX121. It was developed by Professor Ernst Kleist and was employed by the United States Colonial Marine Corps and the private security forces stationed at Charon Base.[2]

The Sound Cannon is a long, tubular, man-portable weapon that fires a directional ultrasound beam. Designed by Professor Kleist,[1] it is intended solely for use against Xenomorph targets — the beam it projects completely immobilizes the creatures without damaging them, allowing them to be captured alive and intact for use in Kleist's experiments. As it does not fire conventional projectiles, the weapon produces no recoil, no sound and no muzzle flare when fired. In fact, it produces almost no indication of any sort that it is being used, with the exception of making the air the beam is passing through shimmer as though being subjected to great heat.[3]

Despite the Sound Cannon's superb effect on Xenomorphs, the weapons used at Charon Base were unreliable.[4] The device suffered from a major drawback in that it had a tendency to dangerously overload, and if it was not promptly shut down before the overload reached critical levels, the weapon would explode with devastating force. It was one such explosion that ultimately destroyed Charon Base.

Given Kleist's well-documented propensity for stealing technology from rival corporations, it is possible the Sound Cannon was based on data from Lasalle Bionational, who were the first to discover the immobilizing effect of ultrasound on the creatures.[5]

The prototype for the Sound Cannon was a small, handheld device created by Kleist to call and control the tame Xenomorph Warriors created by the science team at Charon Base. The prototype, presumably far less powerful than the full-size cannons used by the Colonial Marines at the base, instead acted similarly to a whistle and could be used to attract Kleist's tame Xenomorphs. 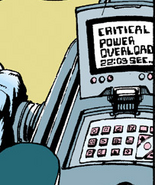 The control panel atop the weapon, showing it is beginning to overload

Retrieved from "https://avp.fandom.com/wiki/Sound_Cannon?oldid=237860"
Community content is available under CC-BY-SA unless otherwise noted.