The Solomons Habitation Tower was one of the three major towers on Sevastopol Station. It is where the vast majority of the station's inhabitants lived, and also housed the local headquarters for the Office of the Colonial Marshals.

The habitation tower was the area in which a group of survivors lead by Sinclair decided to take refuge.

The Galleria concourse, heavily damaged during the Xenomorph incident.

Entrance to the Colonial Marshal bureau.

A 3D model of Sevastopol, showing the three main towers.

Concept art of a memorial wall in the Habitation Tower, covered in photos of the Xenomorph's victims. The entrance to the Marshal bureau is also visible on the far right. 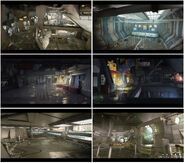 Concept art of various areas within Habitation.
Add a photo to this gallery
Retrieved from "https://avp.fandom.com/wiki/Solomons_Habitation_Tower?oldid=246056"
Community content is available under CC-BY-SA unless otherwise noted.