Xenopedia
Register
Don't have an account?
Sign In
Advertisement
in: Weapons and technology of the Hunt, Predator 2 weapons, Aliens vs. Predator 2010 weapons,
and 4 more

Yautja
The Smart Disc,[1] also known as the Smart Weapon,[2] Cutting Disk[3] or simply the Disc,[4][5] is a primarily thrown Yautja weapon. It is an extremely sharp circular cutting device that is typically thrown like a discus and yet returns to the user like a boomerang. It also features a hand grip for use as a melee slashing weapon.[6]

Computer-controlled gyros guarantee that the Smart Disc returns to its wielder when thrown and also give the weapon a degree of auto-guidance, allowing it to alter its course in mid-air and follow a moving target if necessary.[1] However, the means by which the disc maintains its altitude during these maneuvers is not understood, and clearly involves technologies far in advance of anything possessed by mankind. Smart Discs are capable of automatically tracking a target using their body heat signature,[2] although some can alternately be manually directed in flight using the targeting laser built into the Predator's bio-helmet.[5] The weapon is capable of tracking multiple targets with one throw,[1] giving it capabilities against large groups of enemies that most other Yautja weapons do not possess. Its devastating razor edges are capable of cutting through most substances with ease — a Smart Disc has been seen to cut through half a dozen cattle carcasses and a man in quick succession without any effort.[6] However, in the event that the Disc becomes embedded in a solid material, it can be returned to the thrower with the push of a button on the Predator's wrist gauntlet.

Some Smart Discs shrink in size (usually by telescoping shut in one direction) when not in use, for ease of storage about a Predator's person; this telescoping action also apparently activates and deactivates the Disc's systems.[6] Others have been seen to have teeth-like serrations around their circumference.[5]

Some Yautja, known as Disc Masters, and known to have a degree of mental control over the Smart Disc and are able to redirect it simply using their mind, although such a skill takes years to hone.[7] Discs may also be upgraded with a nanovibronic edge, in essence a high speed molecular chainsaw around their circumference that can tear through even hardened composite armors.[7] Furthermore, it is possible for a Predator to embed a nanovibronic Smart Disc within an opponent and then activate the weapon's "haywire mode".[7] Needless to say, few enemies fare well with berserk ripping machines embedded in their internals.

When Stan Winston Studio began work on Predator 2, Stan Winston and his crew were tasked with bringing back many of the familiar elements they'd created for the original film: the Predator's ornate tribal appearance, his bio-helmet with infrared vision and his articulated mandibles. However, director Stephen Hopkins had a few ideas for making the new City Hunter Predator different from the first, including more weapons.[8]

The Smart Disc was designed and created by Stan Winston Studio.[8] SWS concept designer Mark "Crash" McCreery drew some sketches of the Disc illustrating how to grip it.[8] Stan Winston Studio built multiple Discs, from hero versions that opened and lit up, to simpler stunt versions.[8] The servo parts were seemingly used only on the heroes, as most known hardcopy stunts props don't include the metal hardware needed to mount them.[9] 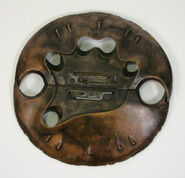 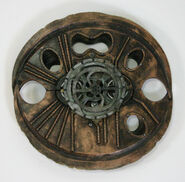 The same stunt prop from the other side.[9]

A 1990 Predator 2 fold-out poster insert, found within Lobo issue 2.[10] The Smart Disc is featured in the bottom left corner. 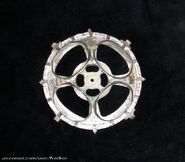 An original piece of a Smart Disc prop from Predator 2. This acrylic piece sat against the centre of the Disc with the smaller blade mounted to it.[12] 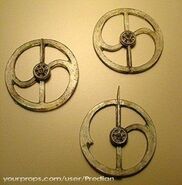 Three production used and broken acrylic blades from a Smart Disc prop. These were later used by Icons as reference for a more detailed replica disc weapon before it was decided not to include the blade elements.[13] 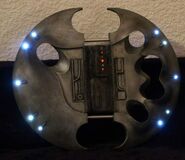 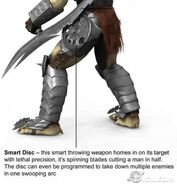 Promotional render of the Smart Disc from the video game Predator: Concrete Jungle. 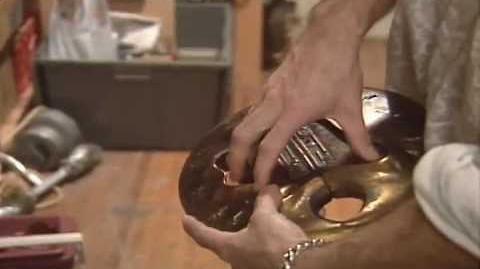 The Making of Predator 2 - Weapons Of Choice - Smart Weapon EQ
A behind the scenes video of the Smart Disc seen in Predator 2.