Xenopedia
Register
Don't have an account?
Sign In
Advertisement
in: Weapons and technology of the Hunt, Stubs, Thrown weapons,
and 5 more
English

Yautja
The Shuriken is a primarily thrown Yautja weapon. Constructed with six retractable blades, it is sharp enough to cut into three inches of solid stone or cut a Xenomorph in two.[1] Much like the Smart Disc with which the weapon shares several similarities, it can also be used as a handheld slashing weapon.

Shurikens[2] are essentially the same as the Smart Disc in operation, to the point where they can be viewed as merely a different design of the same weapon. Like the Smart Disc, the Shuriken has in-built tracking and flight-correctional capabilities that allow it to track a target (or even multiple targets simultaneously) and return to the user.[3] However, owing to its increased weight and bulk over the Smart Disc, it is not uncommon for the weapon to fail in the latter regard and become lodged in solid surfaces instead of returning to its point of origin. Also like the Smart Disc, Shurikens have considerable cutting power — one has been seen to carve clean through a Xenomorph without slowing down, as well as maintaining sufficient velocity to subsequently lift and pin a human to a wall several feet above the floor.[1]

When not in use, the Shuriken's six blades fold away into the hub for ease of storage.[4]

Alien vs. Predator director Paul W. S. Anderson developed the Shuriken as a replacement for the Smart Disc; while he liked the concept of a thrown Predator cutting weapon, he thought the Smart Disc in Predator 2 "looked too much like a frisbee" and designed the Shuriken to be a "more deadly" replacement.[5] The Shuriken was based on the traditional Japanese weapons of the same name (colloquially known as "throwing stars"), although with greatly increased size and the additional ability to be folded away for storage.

Celtic and Chopper at the bottom of the "ice tunnel". Note the Shuriken on their belts. 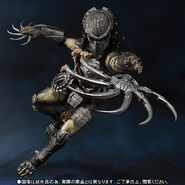