"We have sacrificed much to defend this place...At least respect us for that."
―Joliet shop steward to the marines

The shop steward of the Joliet Mining Facility was a synthetic assigned by Alphatech executive Beliveau to oversee the securement of a secret weapons cache hidden in the Joliet Mining Facility on the planet Bracken's World. Having been programmed with combat and security safeguards, he lead a small group of prototype synthetics and robots and successfully defended the facility for two weeks from Xenomorph attacks and infestation. After a squad of marines and Beliveau visited the facility to retrieve the weapons for their war against the Xenos and Bug-Men, he was eventually destroyed alongside his robotic companions after sacrificing himself to grant the marines who arrived there safe passage.

The shop steward was programmed by Beliveau to oversee the securement of a weapons cache on the Joliet Mining Facility. The facility is managed by a few humans but otherwise, is ran completely by old prototype synthetics and robots, to which Beliveau described them as "toasters with positronic brains". However, after a Xenomorph infestation, the synthetics banded together to hold out the facility and successfully did so for two weeks, with the shop steward, the most advanced model in the complex, being the leader.

After recently defending the group from an alien attack, the shop steward and the group is visited by a marine squadron, seeking the weapons he was originally set to defend. As the marines explore the area, the marine Chen, unhinged and high on Royal Jelly accidentally shoots one of the shop steward's closest robot companions, Billy. The shop steward greets the squad by scorning their undisciplined nature and angrily chokes Chen. Beliveau eventually ordered him to refrain and he complies with helping the marines.

As they stock up weaponry on the APC, the group are suddenly ambushed by Xenomorphs. In the chaos, one of the robots, Jody, volunteers to manually detonate himself on top of an ETV to blow a hole through the hanger for the APC to drive through. The marines load up into the APC but Chen is suddenly grabbed by an alien. The shop steward saves her and kicks her into the vehicle, citing that his mission here "is finished". As the marines take off, the shop steward is quickly overpowered by several Xenomorphs and subsequently torn to shreds, leaving Chen guilty for her previous actions.

Despite being an advanced model android, the shop steward displayed a very passionate, emotive personality - being caring towards other, more primitive synths and robots, and displaying initial hostility towards the marines that arrived in the facility. He held his robotic companions in very high regards, citing them as being as alive as he was, and as such was sad to see fellow synthetics Billy and Jody destroyed.

The shop steward also appeared to be largely selfless, sacrificing himself to save the marine that had previously killed Billy.

The shop steward as he is seen tearing an inner jaw off of a Xenomorph on issue 7 of Aliens: Colonial Marines.

The shop steward alongside his companions. 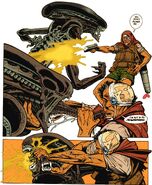 The shop steward tearing the inner jaw off of a Xeno.

The shop steward bidding farewell to Jody.
Add a photo to this gallery
Retrieved from "https://avp.fandom.com/wiki/Shop_steward?oldid=228976"
Community content is available under CC-BY-SA unless otherwise noted.