"Welcome to Sevastopol Station, your home away from home. Conveniently situated in the Zeta Reticuli region, the station is a gateway to commerce and resources in this quadrant."
―Sevastopol tourism broadcast (from Alien: Isolation comic)

Alien: Isolation
Sevastopol Station was a large space station orbiting the gas giant KG-348. Originally constructed to exploit the rich mineral wealth of KG-348 and service the trade routes between Earth and the Outer Rim,[2] the station fell into decline due to economic fluctuations and the re-routing of the Sol-Thedus flight path.

In 2137, the salvage vessel USCSS Anesidora brought a Xenomorph Drone aboard Sevastopol Station, which sparked an infestation that virtually wiped out the station's inhabitants. The station was destroyed by Henry Marlow on December 11[3] when Anesidora exploded, damaging Sevastopol's gravity stabilizers and ultimately dooming the station to burn up in the atmosphere of KG-348.

"Sevastopol's a supply depot in the region. It's a permanent freeport facility."
―Samuels, to Ripley (from Alien: Isolation)

Sevastopol was a massive space station, nearly eighteen kilometers across. It served as a freeport and commercial outpost in the Zeta Reticuli sector. Before the Xenomorph incident that led to its destruction, it had a permanent resident population of 500, although the station was large enough to house around 3000 inhabitants.[2]

Sevastopol's maintenance areas and reactor core were located on the Engineering Platform at the base of the three towers. The various areas were linked by a Towerlink transit system, consisting of trams running inside pressurized tubes from one tower to another. In case of emergency, the San Cristobal Medical Facility also had short range ambulance shuttles available.

Construction of Sevastopol began in 2095, the work carried out by Lorenz SysTech Development and funded by GeoFund Investor.[4] The station finally opened on August 4, 2105,[5] two years behind schedule.[6] However, almost immediately the project ran into a major setback — Sevastopol had been constructed with the intention of selling the station to a corporate owner, yet none were forthcoming. As such, ownership reverted to GeoFund, and the station was operated instead as a freeport with no commercial ties.[6] Sevastopol's opening also coincided with tumult in the space race. Years of mismanagement, and the eventual re-routing of the Sol-Thedus flight path, left the station in danger of being decommissioned. It was eventually purchased by Seegson in 2124, the company aiming to re-energize the station and transform it into a cosmopolitan hub.[4]

Though Seegson's significant investment managed to keep the station active and profitable for another decade, by 2136 Sevastopol was once again in dire financial straits. Seegson's business strategy of focusing on the development of exoplanet-based orbital facilities failed to compete with the colonization and terraforming work of other organizations, most notably the Weyland-Yutani Corporation. On February 17, 2136, Seegson pulled funding from the Gemini Exoplanet Solutions team on Sevastopol due to budget cuts.[7] It was to be an omen for the future — by late 2137, Seegson had decided to cut its losses and decommission Sevastopol, and on October 28 the decision was announced to the station's inhabitants.[8] The station itself was put up for sale. As the slow shutdown of Sevastopol progressed, its workforce was gradually reduced to a human skeleton crew and a contingent of Seegson-produced Working Joe androids.

Much of the station's history was documented in archive logs recovered by Amanda Ripley during her time there.

"There's something on this station. Something you wouldn't believe."
―Axel, to Amanda Ripley (from Alien: Isolation)

On November 11, 2137, Captain Henry Marlow arrived at the station aboard the salvage vessel USCSS Anesidora, requesting emergency medical attention for his wife, Catherine Foster, who had been attacked by a Facehugger but was safely kept in stasis. Head of Medical, Dr. K. Lingard, believed she could remove the parasite herself, but Seegson Chief of Operations B. Ransome blackmailed Lingard into telling him about the creature. Ransome then convinced Colonial Marshal Jethro Waits to choose to break quarantine procedure upon discovering that Anesidora's crew had found the flight recorder unit from USCSS Nostromo, meaning that Sevastopol's crew stood to get a cut of the reward for the unit.

On November 14, a Chestburster hatched from Foster, killing her. The creature escaped into the bowels of Sevastopol and soon began to establish a Hive on the engineering decks, capturing humans to breed new Xenomorphs. Waits attempted to cover up the disappearances whilst he and his men hunted for the culprit, but the situation soon escalated wildly out of control as more and more creatures began preying on the station's population. On November 17, having somehow learned of the ongoing Xenomorph incident, Weyland-Yutani purchased Sevastopol from Seegson and sent APOLLO new operational directives, including Special Order 939.

On December 11, Amanda Ripley, Christopher Samuels and Nina Taylor came aboard Sevastopol via USCSS Torrens to retrieve the Nostromo flight recorder unit. Ripley worked with Waits in a plan to trap the Xenomorph in the Gemini Exoplanet Solutions module, separating it from the station towards the gas giant. The plan succeeded, but Ripley barely escaped, and she later discovered there was more than one Xenomorph on the station.

After the discovery of a large Hive, Marlow decided to overload the fusion reactor of Anesidora in the hopes that it would annihilate Sevastopol and the Xenomorph presence within, but timely intervention by Ripley prevented the complete destruction of the station. However, the blast was strong enough to knock out the station's gravity stabilizers, plummeting Sevastopol into KG-348's atmosphere. The station began burning up in the atmosphere before ultimately exploding.

Following the destruction of Sevastopol, the event was reported as an "accidental detonation" during decommissioning.[9]

There are clear references to the USCSS Nostromo's refinery in the design of Sevastopol, most obviously the dome-like structures on its underside and the tall spires topped with masts above. The interior is also clearly based on the Nostromo's. Creative Assembly have stated this is because both ships were built around the same time.

Sevastopol was named after a city in Crimea, Ukraine.

A single space station being the main setting of Alien: Isolation was first revealed when a large amount of information regarding the name was leaked to Kotaku and published in an article October 21, 2013. The station was not named, however.[10] 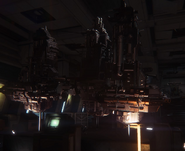 A model of Sevastopol in the Spaceflight Terminal.

A corridor within the station.

The interior of Seegson Communications, with the station's comms array outside the viewports. 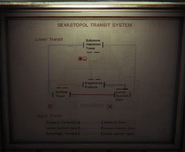 A map of Sevastopol's transit system.

A damaged corridor in the San Cristobal Medical Facility. 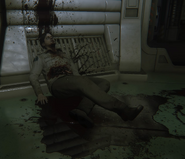 One of the many corpses aboard the station.

An emergency airlock in the Project KG-348 labs.

A corridor in APOLLO's core.

The Hive on the station.

The station's observatory chamber, with KG-348 visible outside.

A 3D model of the Sevastopol.

A plethora of posters across Sevastopol.

Concept art of Sevastopol prior to the incident.