View source
watch 01:23
Wiki Targeted (Entertainment)
Do you like this video?
Play Sound

"It's the Queen."
"Say again, O'Neal. Did you just say 'the Queen'?"
"What else would you call it? It's laying eggs."
―Pvt. O'Neal and Cpt. Cruz, regarding the Second Acheron Queen (from Aliens: Colonial Marines

The Second Acheron Queen was the second leader of a Xenomorph Hive on Acheron (LV-426), encountered in 2179 by a unit of Colonial Marines from the USS Sephora. The Queen served as the successor to the First Acheron Queen, which was killed by Ellen Ripley 17 weeks previously. She was killed when she was ejected into LV-426's upper atmosphere from the Resolute by Captain Jeremy Cruz.

Following the death of the First Acheron Queen, Project Ilythia facilitated the development of a second Queen at the Origin Facility by Dr. Stanton under Dr. Conrad.

After the Weyland-Yutani Corporation located the derelict ship on LV-426 and constructed the Origin Facility around the vessel's remains, Corporal Dwayne Hicks and Rick Levy entered the tunnels near the ship, discovering the Queen inside. As they opened fire, the Queen called upon Drones to cover her escape, but she ended up being captured by Weyland-Yutani, who housed her in a large chamber within the research complex. Later, the facility was infiltrated by Corporal Winter and Private O'Neal from the USS Sephora, and during their assault the Marines deactivated numerous security systems across the base, allowing the Queen to break free of her restraints. Despite attempts by Weyland-Yutani scientists to subdue the Queen with gas and neurotoxins, she was able to escape the chamber in which she was being held, slaughtering several scientists in the process.

Rampaging through the base, the Queen later encountered Winter and O'Neal again when the Marines responded to a downed USCM dropship, killing Daggs during her attack. Unable to fight the Queen with the weapons available to them, the Marines were forced to run and hide until a second dropship, piloted by Lieutenant Reid, arrived to provide air support; although Reid failed to kill the Queen, the weapons fire drove her off.

The Queen later managed to board the Resolute, a Weyland-Yutani FTL-capable starship stationed on the planet, before it departed, once again encountering the Sephora Marines when they crashed into the vessel's cargo hold in their dropship. After stalking Winter through the hold, the Queen was ejected through the open cargo doors on a delivery catapult, although she managed to cling to the outside of the vessel and even began climbing back aboard. In a sacrificial move, Captain Cruz, wounded and trapped inside the wreckage of the crashed dropship, activated the craft's engines, slamming into the Queen and sending both tumbling out of the spaceship as it prepared to breach LV-426's atmosphere. The Queen, along with Cruz, perished in the fall.

The Queen being captured by Weyland-Yutani personnel.

The Queen arrives at the crashed dropship.

Side close-up of the Queen's face. 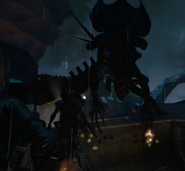 The Queen climbs back on board the Resolute.

The Queen launched to her death.

Early screenshot of the Second Acheron Queen fighting a Marine in a Power Loader.

Community content is available under CC-BY-SA unless otherwise noted.