"Look, I'm just a geologist. I like rocks, I love rocks! Now it's clear you two don't give a shit about rocks. But what you do seem to care about is gigantic dead bodies, and I don't really have anything to contribute in the GIGANTIC DEAD BODY ARENA! I'm gonna go back to the ship... if you don't mind."
― Fifield (from Prometheus)

Sean Harris
Sean Fifield[1] was a geologist who was a part of the crew of the USCSS Prometheus sent to search for the origins of mankind on LV-223.

Fifield was hired by Weyland Corp to partake in a space expedition aboard the USCSS Prometheus to the distant moon LV-223. After spending two years in hypersleep Fifield, along with the other crew members, was woken up by David. Fifield was approached by Millburn, who wanted to be his friend, but he coldly rejected it. As the Prometheus arrived on LV-223, Vickers, Shaw and Holloway briefed the crew on their mission to find the Engineers. Once the Prometheus lands on LV-223 the team (Shaw, Holloway, David, Ford, Jackson, Millburn and Fifield) explores a large artificial structure nearby. While inside the Engineer Temple, the team came across a water-related terraforming system that made the air within the temple breathable. As the team moved deeper into the temple, Fifield activates his PUPS in order to analyze and virtually map the entire temple. David activated the temple's holograms, which led them to find the corpse of an Engineer. Fifield panics and decides to flee further into the Engineer Temple with Millburn. Due to a rapid windstorm, the team was forced to return to the Prometheus. Fifield and Millburn however, were unknowingly left behind and had no choice but to stay in the temple until the windstorm calms down.

The two crewmembers soon encounter two Hammerpedes that emerge from the black liquid and proceed to attack Millburn. Fifield uses his utility knife to cut the Hammerpede's head off, his helmet and subsequently his face is sprayed with acid and he falls face first into the Black Liquid, which appears to painfully meld into his face. At a later stage his camera reappears outside the Prometheus ship and the crew ventures out to investigate, with a seemingly incapacitated Fifield waiting for them. Mutated by the Black Liquid, Fifield slaughters several crew members. His transformation allowed him to survive being shot in the head. However, he was eventually incinerated by a flamethrower and shot with a shotgun after surviving being run over by an RT Series Group Transport.

―Fifield and Shaw (from Prometheus)

Fifield participated in many missions before being aboard the Prometheus, and has become very unstable as a result. He also appears to be very vibrant, as seen from his tattoos, his bright red mohawk, and Hawaiian-type outfit. He has a typical "tough-guy" attitude as seen when he displayed hostility towards Millburn who was offering his friendship to him.

Regardless of his hostile personality, he also seemed to have a cowardly side; immediately becoming distressed and unreasonable at the first sight of an Engineer corpse and he even aggressively confronted an impassive Elizabeth Shaw when questioning her plans of investigating "gigantic dead bodies" while inside the Engineer Temple.

Originally, Fifield's appearance when he becomes mutated by the black liquid was very different. The creature that he turns into featured a translucent cowl that covered its elongated head, immediately notable for its resemblance to the translucent dome that covers the skull of Xenomorph Drones. However, this design was altered late in production, likely as a result of director Ridley Scott's desire to move the picture away from the original Alien film. Special effects for the scene had virtually been completed by the time the sequence was cut, and a very nearly finished version is included among the deleted scenes on the Prometheus home video releases.

In Jon Spaihts' original script for Prometheus, titled Alien: Engineers, Fifield's transformation was even more extreme — he actually becomes a form of Xenomorph, with an elongated skull, dorsal tubes sprouting from his suit and large clawed talons growing from his hands.[5] 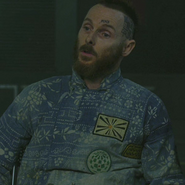 Fifield attacking and killing one of the mechanics at the Prometheus hangar bay. 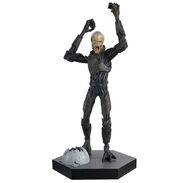 NECA figure of the mutated Fifield

The mutated Fifield's make up and prosthetics.