The Scout Ship is a short range Yautja Spacecraft which is usually connected to a Mother Ship. Scout Ships have three external thrusters and a large blade on the belly of the vessel. The hull of the Scout Ship was not very strong against Yautja technology, with a single hit from a Plasmacaster being able to created a fairly large hole in the side of the ship. Scout Ships usually had a fairly large Trophy Room used for displaying any Trophies obtained on Hunts. Scout Ships also possessed holographic technology capable of displaying holograms of nearby planets likely to be used as a site for a Hunt. Scout Ships also contains a storage room for captive Facehuggers. Scout Ships were used to drop off yautja hunters in close proximity of a planet.

A Scout Ship in Aliens vs. Predator: Requiem.

Bull aboard a Scout Ship next to a hologram projector showing Earth.

A Trophy Room aboard a Scout Ship in Aliens vs. Predator: Requiem. 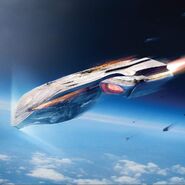 Retrieved from "https://avp.fandom.com/wiki/Scout_Ship?oldid=227430"
Community content is available under CC-BY-SA unless otherwise noted.