"How many drops is this for you, Lieutenant?"
"Thirty-eight. Simulated."
"How many combat drops?"
"Uh, two... Including this one."
―Ripley, Lt. Gorman and Pvt. Vasquez (from Aliens)

William Hope
Lieutenant Scott Gorman[1] was a member of the United States Colonial Marine Corps, part of 2nd Battalion Bravo Team.[6] He was commanding officer of the combat unit deployed to LV-426 aboard the USS Sulaco in 2179, to investigate the sudden loss of contact with the colony of Hadley's Hope. He was subsequently involved in combating the Xenomorph infestation at the colony.

Gorman did not command a great deal of respect from his Marines owing to his inexperience in the field, and was incapacitated throughout much of the incident at the colony, leaving Corporal Hicks to take command. Gorman was among the last to perish in the incident, committing suicide with Private Vasquez rather than be captured by the Xenomorphs for impregnation.

Born in 2142, Gorman was deemed to show "exceptional potential" while training at the USCM Academy.[1]

"You wouldn't be going in with the troops. I can guarantee your safety."
―Gorman, to Ripley (from Aliens)

In 2179, Gorman was sought out by Weyland-Yutani representative Carter Burke to lead an operation to investigate the terraforming colony Hadley's Hope, with which contact had been lost; unbeknownst to Gorman, Burke had specifically arranged for the inexperienced Lieutenant (Gorman had only a single combat operation to his name at the time) to be placed in command of the mission.[7][8] One of Gorman's first duties was to assist Burke in the recruitment of Ellen Ripley, the sole survivor of the USCSS Nostromo's encounter with a Xenomorph lifeform on LV-426 57 years previously.

Initially Ripley, still traumatized by her previous experience, refused to take part in the mission despite Burke's promise that she would be reinstated as a flight officer and Gorman's assurance that she would not be involved with risky combat operations on the ground. However, she later relented, preferring instead to face her fears and accompany Gorman's Marines.

"He's comin' in. I feel safer already!"
"Pendejo jerk-off..."
―Hudson and Vasquez, mocking Gorman behind his back (from Aliens)

After enlisting Ripley, Gorman and the men posted under his command set out for the colony on board the USS Sulaco. At breakfast, Gorman failed to integrate himself with the men, immediately earning their scorn and disrespect; as Corporal Hicks put it, "Looks like the new Lieutenant's too good to sit with the rest of us grunts." This lack of respect became obvious during Gorman's briefing on the mission at hand, when several members of the unit responded to his statements with sarcasm and mockery. Gorman's response was to impose upon them unrealistically harsh deadlines for their preparations.

During the drop, Gorman was clearly uneasy, and his lack of experience came out when questioned by Ripley and his men, creating further tension. After landing at the colony, the Lieutenant oversaw the securing of the main administrative building from the section's APC before heading inside. Gorman and Second Squad soon came across several Facehugger specimens stored in the colony's medical facility, as well as a single surviving inhabitant, Newt, a young girl who had been hiding in the building's ventilation ducts. After unsuccessfully trying to ascertain what had happened at the colony from Newt, Gorman led the Marines to the nearby Atmosphere Processing Plant, where the rest of the colonists had been traced through their PDTs.

Gorman's inexperience showed once again when he allowed his troops to enter the Atmosphere Processor, which was essentially a large nuclear reactor, armed with armor-piercing ammunition that could potentially cause damage capable of creating a massive nuclear explosion; when this was pointed out to him by Ripley and Burke, Gorman had the Marines' ammunition confiscated rather than pull the team out, severely compromising their firepower.

The mission quickly fell apart when the section discovered a large Hive within the Atmosphere Processing Plant and was ambushed by a swarm of Xenomorph Drones. Gorman panicked and froze as he watched his team being slaughtered on the monitors in the APC, forcing Ripley to take over, recklessly driving the APC to the scene of the ambush to try and effect a rescue. Gorman attempted to physically stop her, but was subdued by Burke. While the vehicle was careening through the Processor's service tunnels, a container broke loose inside the cabin and knocked Gorman unconscious.[4] Such was Gorman's failure of command that Hicks later had to restrain Private Vasquez from assaulting Gorman's comatose body.

"You always were an asshole, Gorman..."
―Vasquez's last words, to Gorman (from Aliens)

Gorman was unconscious for several hours, and by the time he eventually came around he seemed to accept that he was no longer in charge of the mission, deferring instead to Hicks' command. When Burke attempted to have Ripley and Newt impregnated by the two live Facehuggers stored in the med lab, Gorman assisted in their rescue and later guarded Burke at gunpoint. When the operations center was assaulted and overrun by Xenomorphs, Gorman was forced to release Burke in favor of defending himself. The party retreated into the ventilation tunnels of the complex to escape.

While Vasquez brought up the rear of the retreat, she engaged a drone that dropped from an overhead tunnel. While shooting the creature, its blood spilled onto her lower leg and she became severely injured and unable to move. Ahead in the tunnel, Gorman sent Hicks off, went back for Vasquez and began to drag her out. Despite saving Vasquez from several Drones, the two soon became surrounded, and with their ammunition exhausted, Gorman pulled the only weapon he had left — an M40 grenade. Not wanting to be taken back to the Hive and impregnated, Gorman and Vasquez detonated the device together, killing themselves and taking several Xenomorphs with them.

"Boy's definitely got a corncob up his ass."
―Frost, regarding Gorman (from Aliens)

Gorman was a fresh and inexperienced officer, and was also the new commander to the unit. His inexperience and complete lack of interest in getting to know the soldiers under command — at times he even had trouble remembering their names — were critical aspects in his failure to command effectively. However, these qualities were apparently exactly what Weyland-Yutani had sought when they arranged for him to take command of the mission, no doubt hoping he would inadvertently assist them in acquiring a live Xenomorph specimen, when he caused the mission to fail.[7][8] Gorman's failure to act reached its peak when he froze during the ambush inside the Atmosphere Processor, rendering him totally incapable of issuing orders that might have helped his men escape the situation. While Sergeant Apone initially filled this void, his capture by the Xenomorphs left the Marines leaderless and in disarray.

Despite these flaws, Gorman later seemed to accept his situation upon regaining consciousness inside the colony. He realized he was in no position to assert his authority and effectively relieved himself of command, becoming just another "grunt". Subsequently, he redeemed himself for his failures when he, along with the rest of the surviving marines, helped save Ripley and Newt from Facehuggers released by Burke, and returned for the wounded Vasquez in the air ducts, even though it was obvious that such an act would likely result in his own death. Perhaps the greatest sign of Gorman's reversal of character was when Vasquez, who had initially blamed him for the disastrous ambush inside the Hive, accepted him as a comrade before they died, joking with him as he provided the grenade that would kill her that she'd always thought he was "an asshole."

In the audio drama of Alien: River of Pain, Gorman retains his strong sense of morals and ethics, refusing Burke's request for him to spy or otherwise manipulate Ripley for the company's purpose and also refused to have Bishop be reprogrammed so that he could be used by Burke for espionage.

As an officer, Gorman was armed only with a Heckler & Koch VP70 as his sidearm, kept in a fabric holster[9] worn in a traditional pistol belt and holster combination.[10] As Gorman was left-handed, he kept the holster's flap folded back and his VP70's grip pointed outward to aid in drawing his sidearm.[10] However, he also equipped himself with several M40 HEDP Grenade grenades during events on LV-426, one of which he ultimately used to commit suicide alongside Vasquez. 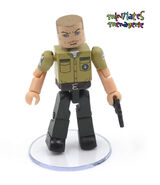