Helped kill a Xenomorph Queen.
Host to the Earth Predalien.

Ian Whyte
Scar, also known as the "Alien Hunter",[3] was a Young Blood Yautja who, in 2004, traveled to Earth with his brothers[1] Celtic and Chopper to undertake an initiation Hunt in an ancient Predator pyramid beneath the ice on Bouvet Island. In stalking and killing Xenomorph prey, they hoped to become Blooded Yautja.

Scar was the youngest and smartest of the three brothers,[1] and was the only Predator to succeed in killing a Xenomorph and thereby gain his Blooded status; he in fact killed several of the creatures, including a Queen, which he defeated with the assistance of Lex Woods. Despite his successes, Scar was mortally wounded by the Queen and died soon after the creature was slain. He was also impregnated by a Facehugger and was host to the Predalien that later terrorized the town of Gunnison, Colorado.

Scar, along with his fellow Yautja Celtic and Chopper, traveled to earth in order to undertake a rite of passage in an ancient Yautja-constructed pyramid, a ritualistic hunt against Xenomorphs that, should they survive it, would mark their passage from adolescence into adulthood as Blooded Predators. Upon arriving on the surface in drop pods, the three Young Bloods made their way to Razorback Point Whaling Station, situated above the pyramid, where they encountered several members of Charles Bishop Weyland's expedition, lured to the site by the heat bloom generated as the pyramid began to activate its systems. The three Yautja quickly slaughtered everyone they found, including Rusten Quinn's drilling team and several of Max Stafford's mercenaries. With the camp cleared, the Yautja descended to the pyramid below through the access shaft bored by their Mother Ship, with Scar briefly pausing at the base of the tunnel to finish Quinn.

Upon entering the structure, the Predators discovered the human team had found and taken their Plasmacasters, and duly split up to hunt them down.[4] Scar was the first to discover the human expedition, ambushing them and killing Stone and Bass before the shifting pyramid separated most of the survivors. Still in pursuit of the stolen Plasmacasters, Scar later caught up with Lex, Sebastian and Weyland, confronting Weyland when he attempted to buy time for the others to escape with one of the Yautja weapons. Sensing the cancer eating away at Weyland's lungs, Scar initially spared him, but when Weyland attacked with an improvised flamethrower, Scar turned and impaled him on his Wristblades, killing him.

As Scar continued to pursue Lex and Sebastian, by this time the only Predator still alive inside the pyramid, he was ambushed by a Facehugger and a Xenomorph Drone, which he succeeded in killing. Now a Blooded Predator, Scar removed his bio-helmet and marked himself with the acid blood of the Facehugger. However, before he could put the helmet back on, a second Facehugger attacked, subduing him and impregnating him with a Chestburster.

When Scar eventually revived and caught up to Lex, she dutifully returned his Plasmacaster, realizing its significance and hoping Scar would spare her as a result of the act. The pair were then assaulted by a group of Drones led by Grid, which they succeeded in fighting off. Impressed by the fact Lex dispatched one of the Xenomorphs herself, Scar mutilated one of the dead Aliens, fashioning a shield from its domed carapace and a spear from the tip of its tail that she could use to defend herself. Forging an uneasy alliance, the pair headed for the Xenomorph Hive so that Scar could destroy it.

Inside the Hive, Scar and Lex discovered Sebastian cocooned and impregnated — Scar caught the Chestburster that erupted from his body and casually snapped its neck. Scar then activated his Self-Destruct Device and left it in the Hive, fleeing the impending explosion with Lex. At the base of the tunnel through the ice, the pair were again attacked by Xenomorphs, and while Scar was wounded, he managed to escape with Lex up through the access shaft. Scar's Self-Destruct Device detonated moments later, and Scar and Lex had to flee the collapsing ice once they reached the surface.

With the pyramid destroyed, Scar gave Lex an initiation mark of her own, burning it into her cheek with Xenomorph blood. At that moment, the Queen burst through the ice, seeking revenge for the destruction of her Hive. Scar and Lex fought the Queen together, eventually chaining the beast to the whaling camp's cast iron separating vat and pushing it over the cliff into the sea. The massive weight dragged the Queen over the edge and into the frozen depths, but not before she impaled Scar with her tail, mortally wounding him. Although victorious, Scar perished.

At that moment, the Mother Ship revealed itself nearby, while the Elder overseeing the hunt approached. The Elder's companions collected Scar's body and carried it honorably to their ship, and the Yautja departed. As a sign of respect, Scar's body was placed atop a ceremonial plinth aboard the vessel, presumably to be transported home for burial. However, after the other Yautja left, a Predalien Chestburster emerged from his chest. The creature would go on to wreak havoc aboard a scout vessel, eventually triggering a huge Xenomorph outbreak in the town of Gunnison, Colorado.

From what is shown, Scar seemed to fight differently from his fellow Predator Young Bloods. Celtic seemed to rely more on his size and strength while Scar, on the other hand, seemed to be a smarter fighter, using his senses to his advantage. He was an honorable warrior and abided by the Yautja Honor Code accordingly. Additionally, he seemed to show a sense of humor when he startled Lex by driving his dagger into the skinned head of a dead Xenomorph and causing its second mouth to pop out, which brought him amusement when Lex flinched.

In the novel, Scar removes his armor in front of Lex, not caring about her reaction.

Stan Winston and his effects studio, who had previously handled the design of the Predator creatures in Predator and Predator 2, did not return for Alien vs. Predator; as was the case with Alien3, the torch was passed from Winston to Amalgamated Dynamics, Inc., whose founders Tom Woodruff, Jr. and Alec Gillis had in fact worked for Winston before starting their own studio. Despite serving under Winston in 1987, Alien vs. Predator would in fact be the first time Woodruff, Jr. and Gillis had worked on Predators as, during the production of the original Predator, the duo had in fact been assigned a separate concurrent project, the horror comedy The Monster Squad.[5]

"The Predator was a bit of uncharted territory. Of course, it's a creature suit and that's what we do, but there are always fan expectations. We had a lot of input from Paul Anderson so that helped things move along quickly, since he knew what he wanted. He was a real joy to work with because of his decisiveness. We knew that our Predator would in a way be a prototype for our company."
―Alec Gillis on designing the Predators[5]

While ADI ultimately handled the creature effects in the film, Steve Johnson's Edge FX (known for Species, featuring a creature designed by H. R. Giger, and Stargate SG-1) also made a bid for the work. Johnson proposed radical design changes to the creatures in the film, including the Predators, and conceptual artist Constantine Sekeris produced several sketches of Predators that differed substantially from those seen in Predator and Predator 2.[5][6] However, the producers considered these designs too far removed from what had appeared before, and ADI was hired for their more traditional take. Even so, director Paul W. S. Anderson still wanted the Predators in his film to look different to those in the first two movies. As a result, they were made more muscular and imposing, with bulkier armor that covered more of their body (to protect them from the acid blood of the Xenomorphs).[5] The revised Predator design also sought to echo the original Aliens vs. Predator comic, with a more comic book-like silhouette — wider shoulders, narrower waists and smaller heads. The dreadlocks were made longer, to accentuate head movement.[5] In addition to the creature's altered physical attributes, they were given more complex protective armor that covered a greater proportion of their body, given that they were now fighting Aliens instead of humans.[5]

The basic body suits for all three Predators in the film — Scar, Celtic and Chopper — were actually poured from the same mold, before being customized after the fact to make each character appear unique. Sixteen suits were created, each painted in the same color scheme so that they could be replaced at any time if necessary.[5] As in Predator 2, the armor was created separately as the script required it to be removed; armor pieces, made from either fiberglass or flexible urethane, were used to customize the suits and create the three different individuals.[5] Scar was given longer, telescopic Wristblades, a throwable Shuriken and a new, sleeker Combistick. Scar's helmet was designed to mimic the original Jungle Hunter design.[5]

Of the three main Predators, Scar is the only one to be seen without his helmet. As the script required a greater amount of interaction with the character Lex Woods, a wider range of subtle facial movements were built into the character's animatronic face helmet. The creature's facial skin tones were also made more human and less amphibian, to help audiences associate and bond with the character.[5]

Scar with his bio-helmet on.

Scar's corpse on board the Mother Ship.

A Predalien erupting from Scar's corpse. 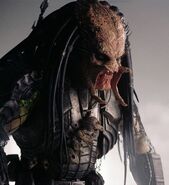 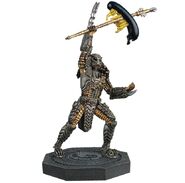 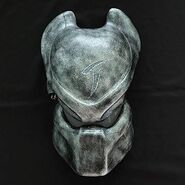