Killed one of the two Neomorphs

Private Sarah Rosenthal,[4] better known as "Rosie",[3] was part of Sergeant Lopé's security team aboard the colonization spacecraft USCSS Covenant. She was serving on the ship during its disastrous voyage to Origae-6, during which it suffered several catastrophes that resulted in the loss of most of the ship's crew and its hijacking by David.

Rosenthal was part of the expedition team that set down on Planet 4. She was killed by the adult Neomorph that infiltrated David's temple.

Before the Covenant expedition

Rosenthal was responsible for previously saving Lope's life after stopping an assailant attempting to assassinate the sergeant in protest of launching the Covenant on its expedition. Lope gave his thanks by offering Rosenthal the last available position on his security team, as well as inviting her to an expensive meal at a restaurant.

Ambush in the wheat field

"I got it! Daniels, are you OK?"
―Rosenthal, after killing the first Neomorph (from Alien: Covenant)

When Rosenthal and the rest of her team arrived back at the dropship with an increasingly sick Hallett, they were greeted with its destruction following a misguided effort to kill a Neomorph on board. Moments later, Hallett started convulsing and screaming in agony, and seconds later a Neomorph ripped it way through his throat and mouth, killing him while the rest of the team watched in horror. The two Neomorphs then escaped into the night. While Hallett's husband, Lope, mourned over Hallet's body, Rosenthal consoled him, but told him that there was nothing he could do and that Hallett was gone.

Shortly afterward, the two Neomorphs returned to attack the crew. Rosenthal, Cole, and Ankor tried to kill the first Neomorph by shooting it. Enraged, it spun around and struck Ankor with its tail, slitting his throat, tearing his cheek open and ripping his jaw off, killing him. The Neomorph then turned its attention to Daniels, ran at her and then took her to the ground.

It was Rosenthal who saved Daniels by shooting the creature dead. After a few seconds, the second Neomorph returned. As the team tried to locate it in the long grass, Rosenthal turned around - only to see the Neomorph running toward her. Before she could shoot it, it attacked her and took her to the ground. The Neomorph nearly mauled her to death, but she was saved when a synthetic named David scared it away by firing a flare gun into the air.

Rosenthal and the remaining members of the team were escorted to a safe haven by David. While in David's temple, she informed Captain Oram that she was going to freshen up for a while, to which he told her not to go far. While washing up and patching the wounds she sustained during the earlier Neomorph attack, she was accosted by the now fully-grown Neomorph. Rosenthal reached for her pistol in an attempt to defend herself, but before she could do so the Neomorph attacked her, biting off good chunks of her neck. Rosenthal's screams were soon cut short when the Neomorph killed her via decapitation. Her mutilated corpse including her severed head were later found by Oram and David, with the Neomorph still eating her remains. Against David's pleas, an enraged Oram shot the creature dead.

Later that night, Lopé and Cole set out to find her and Oram after the two were reported missing. Cole eventually found her body along with the dead Neomorph and reported her status to Lopé.

Rosenthal's primary weapon was a Thales F90 rifle outfitted with a tactical green laser sight, which she used to shoot one of the Neomorphs dead during the ambush in the wheat field. Later on, she armed herself with a Beretta 92FS Brigadier Inox outfitted with Hogue wrap-around grips, a tactical light, and a black hammer and safety/decocker. She was unable to use it before her death. 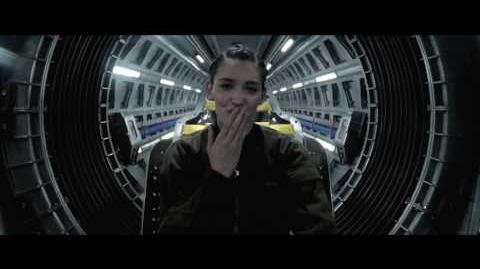 Retrieved from "https://avp.fandom.com/wiki/Sarah_%22Rosie%22_Rosenthal?oldid=254615"
Community content is available under CC-BY-SA unless otherwise noted.