Sandy Collora (born August 8, 1968) is an American film director and design artist who directed the Batman fan-film Batman: Dead End, which featured both the Alien and the Predator. He also served as a concept artist on the 1990 film Predator 2, although he was not credited for this role.

Collora created over 100 concept designs for Predator 2, based on the script, although most of them were never actually seen by the production team outside of Stan Winston's effects studio. Some of these designs have since been made into figures. 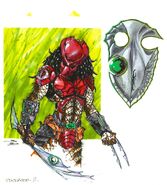 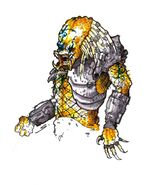 An albino Predator
Add a photo to this gallery

Retrieved from "https://avp.fandom.com/wiki/Sandy_Collora?oldid=256661"
Community content is available under CC-BY-SA unless otherwise noted.