Xenopedia
Register
Don't have an account?
Sign In
Advertisement
in: Xenomorph variants, Aliens featured in the movies
English

Royal Facehuggers, like all other Facehuggers, come from Eggs laid by Queens, although they are somewhat larger and possess armor and a bladed tail to help them protect the unborn Queen they carry inside. They also have webbed digits and a dark brown coloration though the one that impregnated Adams was described being lighter in color and only have webbed digits in the front and back digits, size remains larger than normal however [1]

Most notably, a Royal Facehugger is capable of impregnating at least two separate victims with Chestbursters (one with an infant Queen, the other with a typical Xenomorph) and the Facehugger does not die until both of these embryos have been implanted. Exactly how long a Royal Facehugger can survive after impregnating its first host is not known; however, the specimen on Fiorina "Fury" 161 survived for some time between impregnating Ellen Ripley aboard the USS Sulaco and attacking Babe the ox on the planet's surface.[2]

The Royal Facehugger has only appeared once on-screen, and very briefly, in the Special Edition of Alien3; it is only seen for a few seconds on-screen when Murphy finds the dead creature alongside Babe's corpse when the latter is taken to the prison slaughterhouse.

In the special features included on the Alien3 DVD and Blu-ray, Alec Gillis and Tom Woodruff, Jr. discuss this "Super Facehugger" and point out that they had taken design inspiration for the creature from the Xenomorph Queen. They also consider it to be the creature that implanted the Queen embryo inside Ripley.[1] The Royal Facehugger model was sculpted by effects artist Chris Halls.[3]

However, when Alien3 was released in cinemas, the scene featuring the Royal Facehugger was completely removed, and a regular Facehugger was used in the film in its stead. This left it unclear how two Xenomorphs came to be on the planet, as only one Egg is seen and traditionally Facehuggers have died as soon as their job of implanting a Xenomorph embryo is complete, and also rendered the canon status of the alternate Facehugger debatable. However, the Royal Facehugger reappeared in the novel Alien: Sea of Sorrows, its appearance described as akin to that created for Alien3.[4]

The Queen Facehugger's appearance in the comics is very different to the one in Alien3, likely because the Special Edition of the film featuring the creature had yet to be released. Royal Facehuggers in the comic have the same color as normal Facehuggers but possess spines on their backs and have spots on their air bladders. They have appeared in several comic books including Aliens vs. Predator: Deadliest of the Species, but all share the same appearance.

The Royal Facehugger, photographed in the Alien3 special effects workshop. 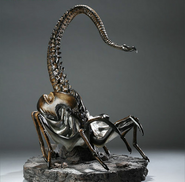 NECA figure of the Royal Facehugger.