"I'm the one that got away. The one you don't fuck with."
―Noland (from Predators)

Ronald Noland was a former United States Army soldier from the 1st Cavalry Division who was kidnapped by the Super Predators and taken to the Game Preserve Planet. He managed to survive in the hostile jungle for many years, avoiding the Super Predators (and their dangerous prey) by hiding in an abandoned drilling platform. In 2010, he was found by Royce and the other individuals dropped on the planet at that time.

Noland was killed by Tracker when the Super Predators found and infiltrated his hideout.

At some point in his life, Noland joined the United States Army Air Cavalry and served during the Vietnam War. He remained with the military into the 1980s,[3] during which time he was tasked with overthrowing a government that had crossed the CIA. However, as the mission took a turn for the worse, Noland was abducted by the Yautja. He later awoke free falling towards a jungle.[4]

When Noland was first dropped on the planet, he was injured in the fall and found by a hunter. The hunter spared Noland due to his injuries and Noland eventually recovered by using his military training to survive. He later ambushed and killed the hunter he first came across after he landed.[4] He later attempted to go to the boundaries of the Game Preserve only to realize that there was no boundaries to the preserve.[2] Noland has survived for 7 or 10 hunting seasons, and at least twenty years according to another soldier,[4] by hiding and evading detection and salvaging weapons and gear.

After several years on the preserve, Noland came across a man named Drake, who inadvertently drew some Predators while he was scavenging.[5] Noland and Drake ended up scuffling before Noland noticed that a hunter was in the area. He then took Drake back to his home and offered the man some food. Drake attempted to talk Noland into taking the fight back to the hunters, even going so far to question Noland's honor as a soldier. Noland then told the man that when he had the time he had here then he could question him on his motives. Frustrated, Drake left, taking one of Noland's Smart Discs he salvaged off a hunter.[4]

Noland then chased down the man for stealing his salvage only to come across Drake killing the creature that attacked him. Noland then took back the weapon and took Drake back to his home. Drake then came up with a plan to take the fight back to the hunters with Noland's help. Noland went on ahead to prep for the trap while Drake drew one out. The plan worked and Noland knocked out the hunter when it crawled out of the pit with sharpened sticks and tying up the injured creature. Noland and Drake argued what to do with the captured hunter with Noland stating it would just be better to kill it. Unknown to both men and the hunter, a Predator Falcon watches the three.[6] Noland later left Drake after the disagreement. He witnessed his death at the hands of the Super Predators.[6]

Meeting Royce and the others

"Noland, Ronald. Air Cav. They drop y'all in too?"
―Noland, to Royce (from Predators)

Royce and the others are attacked by an insectoid creature, (another alien released onto the planet as game). Noland kills the alien and decloaks, getting the jump on the team. When asked "What, the fuck, are you?" Noland removes his helmet revealing to the team that he is human. He later takes them to his hideout, where he explains the situation: the Predators have been harvesting worthy game from Earth and other planets for centuries, using them to improve their hunting skills. Noland explains that the Predators always come in groups of three and there is a blood-feud occurring between two different tribes - the "black" tribe, which is larger and more aggressive, and the "classic" Predators seen previously.

Later, as the group rests, Noland attempts to murder them by asphyxiation by smoke, in order to take their equipment as he believes it is every man for himself. Royce alerts the Tracker Predator by firing an explosive shell from his AA-12 so it can detect the heat signature. As Noland realizes this, he attempts to make his escape only to be confronted by Tracker who has taken aim, charging his Plasmacaster for the kill. Noland smiles and says, "Finally found me ol' big dog, what took you so long?" Tracker fires his Plasmacaster, blasting him into pieces and a large cloud of blood.

"You're in my house, motherfucker!"
―Noland, taunting Royce and the others (from Predators)

Noland is a scavenger and a survivor and through his means of staying alive has become mentally unstable, but at times shows enough stability to explain to the rest of the group his history on the planet and details about the Predators and their means of hunting as well as learning from their mistakes. He frequently speaks and argues with an imaginary companion, which apparently is in some form a manifestation of his conscience since it is the imaginary companion who seems not wanting to kill the group during Noland's attempt at causing smoke inhalation. Noland's "invisible" companion may be his deceased "partner" Drake. A way of not dealing with his death and now being alone again, or the result of feeling responsible for his death.

Noland after he introduces himself.

Noland as he prepares to lead the team.

Noland in his armor with his weapon.

Noland (right) on the cover of issue 1 of Predators.

Noland (bottom) on the cover art of Issue 3. 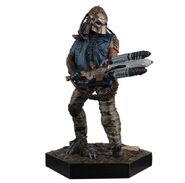 Minimates figure of Noland.
Add a photo to this gallery

Retrieved from "https://avp.fandom.com/wiki/Ronald_Noland?oldid=248942"
Community content is available under CC-BY-SA unless otherwise noted.