Sigourney Weaver
Nicole Fellows (young Ripley 8)
A clone of Ellen Ripley, known as Ripley 8,[4] or Number 8, was the eighth and first fully successful clone created by the United Systems Military aboard the USM Auriga. Although she was essentially no more than a by-product of the top-secret USM project to resurrect the Xenomorph XX121 species, the scientist in charge of the program, Dr. Wren, ultimately elected to keep her alive for study. Ripley 8 subsequently became involved in the Xenomorph outbreak and infestation aboard the Auriga.

While outwardly human, cross-contamination of DNA between Ripley 8 and the Xenomorph inside her endowed Ripley 8 with several Xenomorph attributes; essentially, she was neither human nor alien, but something in between. She was one of four survivors of the Auriga incident, along with Dom Vriess, Johner and the Auton Annalee Call.

Following the destruction of the original Xenomorph Hive and the derelict on Acheron, and the death of the Runner on Fiorina "Fury" 161, Ellen Ripley committed sacrificial suicide to destroy the last known Xenomorph specimen in existence — the embryonic Queen developing inside her. With the destruction of that embryo, all hope for developing the Xenomorphs as biological weapons was seemingly lost.

However, blood samples taken by Jonathan Clemens when Ripley arrived on Fiorina 161 were recovered by Weyland-Yutani when the facility was closed down.[4] In 2356, these samples passed on to the United Systems Military following the collapse of Weyland-Yutani.[1][4] Owing to the Xenomorph's ability to share DNA with its host (the so-called "DNA reflex"), this particular sample of Ripley's genetic material also contained the DNA of the Xenomorph embryo she had been carrying at the time the blood was extracted. Over the following 25 years, the USM's science division also made considerable breakthroughs in cloning technology (which, despite profound technological advancements in other fields by the 2300s, had not been heavily researched due to cloning being deemed illegal). Eventually the USM began trying to create a clone of Ripley using the blood samples and, hopefully, gain access to the Xenomorph Queen inside her.

The science team, led by Dr. Wren, quickly discovered that it was extremely difficult, if not totally impossible, to separate the two species' DNA in the blood samples during the cloning process, owing to the Xenomorph's ability to incorporate elements of its host's DNA at the embryonic stage and thereby alter its own phenotype. The research team had originally hoped to simply clone the Xenomorph Queen back to life from the samples, but this quickly proved impossible, and attempts at cloning Ripley and the Queen together resulted in genetic crossing, leading to horrifically deformed creatures that were essentially fusions of Ripley and the Xenomorph, combined at a genetic level. Nevertheless, after seven failures and repeated refinements of the procedure, the USM scientists rallied their efforts to create an eighth, successful clone, an apparently perfect recreation of Ellen Ripley and the infant Queen gestating inside her. The project had taken 10 years to reach fruition,[5] but the scientists finally achieved their goal and recovered the infant Chestburster before it could emerge.

"You're going to make us all very proud."
―Wren, to Ripley 8 (from Alien Resurrection)

While Ripley 8 had initially represented no more than a means to acquire the Xenomorph Queen, Dr. Wren ultimately decided to preserve her for study, despite the complaints of the project's overseer, General Peréz. Ripley 8 was subjected to numerous tests that probed both her physical and mental state, and it quickly became apparent that she was not in fact human, and that residual Xenomorph DNA in her system meant she was in fact a hybrid. Contrary to the expectations of the USM scientific team, she possessed memories and intellect inherited from Ellen Ripley, although she did not fully comprehend this knowledge. These memories were inherited in a similar fashion to the Xenomorph's ability to transfer memories down through the generations genetically.[6] All through her development, Ripley 8 was kept ignorant of her origins and purpose, yet she was almost immediately able to sense that the Queen had been extracted from her and was breeding aboard the Auriga, another side-effect of the Xenomorph DNA in her body.

"What am I?"
"You're a thing. A construct. They grew you in a fucking lab."
―Ripley 8 and Call (from Alien Resurrection)

When the Cloned Xenomorphs escaped from their containment cells aboard the Auriga, Ripley 8 joined up with the survivors from the Betty in an attempt to escape the ship. Along the way, Ripley 8 discovered the failed clones that had come before her, including Ripley 7, who was still alive and begged to be euthanized. Ripley 8 complied, incinerating the entire laboratory in a rage using a Draco Double Burner. As the survivors neared the Betty, Ripley 8 was captured by the Xenomorphs and taken to the Queen by the Lead Alien, where she witnessed the birth of the Newborn, a result of the imperfect cloning processes that had given her her own abnormal traits.

The Newborn killed the Cloned Queen and apparently viewed Ripley 8 as its true mother, although Ripley 8 fled from the creature at the first opportunity and made it to the Betty. The Newborn followed and also made it aboard the ship as it departed, forcing Ripley 8 to finally confront it in the vessel's cargo hold. Using the creature's apparent reverence for her, she lured the Newborn into a false sense of security before burning a hole in a viewing port in the ship's hull with her blood, sucking the hybrid piecemeal out into space.

"What should we do?"
"I don't know. I'm a stranger here myself..."
―Call and Ripley 8, upon their return to Earth (from Alien Resurrection Special Edition)

The Betty ultimately landed on Earth, finally returning Ripley, at least in the form of her clone, to the planet she had been trying to reach for more than 200 years. However, the planet was now an arid wasteland. As Ripley and the other survivors looked down on a devastated Paris, they considered their future and whether the USM would pursue them in the aftermath of the Auriga's destruction.

"Hey, Ripley. I heard you, like, ran into these things before?"
"That's right."
"Wow, man. So, like, what did you do?"
"I died."
―Johner and Ripley 8, regarding the Xenomorphs (from Alien Resurrection)

While Ripley 8 was a clone of Ellen Ripley, her personality was markedly different. Unlike the original Ripley, she was sarcastic, dry, and rarely fazed by the situations that she found herself in. Whether she be in USM captivity, subjected to scientific tests or faced with the horrors of a Xenomorph outbreak, she showed little emotional concern or interest and maintained an emotionless, apathetic exterior, such as when she informed Larry Purvis that he was infected with a Chestburster and calmly described the horrific, fatal birthing process to him. Only the revelation of the previous failed clones and the emergence of the Newborn seemed to elicit any real response from her — she was horrified and distressed by the former, while she showed genuine fear in the face of the latter. Ripley 8 also seemed to possess a far greater capacity for irony than the original Ripley, finding black humor in the often terrible events that surrounded her — the devastation wrought by the Cloned Xenomorphs in particular, devastation she had explicitly forewarned, seemed to amuse her greatly. It is unknown if this is a result of the clone's upbringing inside the ship or her Xenomorph DNA.

Notably, Ripley 8's personality was split between the two species that contributed to her DNA, and she shared both human and Xenomorph sympathies.[7] She often found herself to be in dissent regarding the two species' conflicting goals and aims, and at times even considered siding with the Xenomorphs aboard the Auriga (a desire the creatures apparently shared, they seem to revere her), although ultimately she chose to ally herself with the humans she encountered.[8] Despite her fractured persona, elements of Ellen Ripley's character still shone through in Ripley 8. Mostly notably, she was plagued by vague memories from her previous life, particularly Ripley's prior relationship with Newt; while Ripley 8 could not remember the young girl's name or anything more than superficial details regarding their time together, the deep-seated memories of Newt and her fate clearly distressed her.[9] Furthermore, Ripley 8 also possessed some of the sympathy that was prevalent in Ellen Ripley, perhaps never more obviously than when she chose not to kill Wren for his part in the events aboard the Auriga and the creation of the failed clones that had preceded her.

Due to the unintentional crossing of genetic material during the cloning process, Ripley 8 possessed several unusual traits more often associated with the Xenomorph species. These included:

Though Ripley 8 seemed to rely primarily on her abilities, she was equally capable of utilizing human technology to suit her needs; aboard the Auriga, she used a Lacrima 99 Shockrifle to kill a Xenomorph Drone and an Draco Double Burner to burn down the lab housing the failed clones.

Ripley just before encountering the Newborn 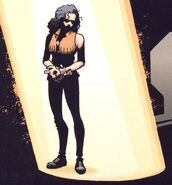 Ripley 8 as she appears in the comics. 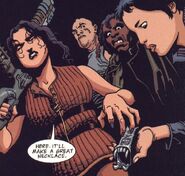 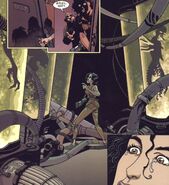 Ripley 8 and the Betty crew.

Ripley 8 as she appears on the front cover of issue 3 of Aliens versus Predator versus The Terminator. 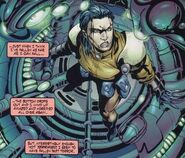 Ripley 8 in the comic.

Ripley 8 as she appears in the Alien Resurrection video game. 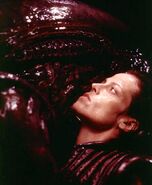 The Lead Alien taking Ripley 8 to the Queen. 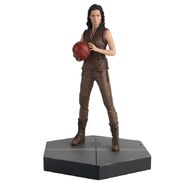 NECA figure of Ripley 8.
Add a photo to this gallery

Retrieved from "https://avp.fandom.com/wiki/Ripley_8?oldid=262063"
Community content is available under CC-BY-SA unless otherwise noted.