Shane Black
Rick Hawkins[1] was a mercenary and a member of Major "Dutch" Schaefer's private military team. In 1987, Schaefer's team was hired by the U.S. military and the CIA for a rescue mission in Guatemala. After discovering that their mission was a set-up to dupe them into eliminating the rebels in the area, Schaefer's squad came into contact with a Predator that stalked and killed the elite mercenaries one-by-one.

Hawkins was the team's youngest member, radio operator and a perpetual comedian. He was the first member of the team to be killed by the Predator.

Hawkins was born in South Boston, Massachusetts.[1] In 1980, he joined Dutch's private military unit as the team's radio operator.[4] Although a part of the team as long as any of the other members, his role as their radio and communications expert meant he had less combat experience than his comrades.[5] Even so, he was still proficient in battle and a hardened warrior, and as part of Dutch's team he saw operations in Angola, Cambodia, Lebanon and Afghanistan,[6] and recently ended a terrorist siege at the Sudanese Embassy in Berlin, Germany.[7]

Shortly after they were dropped into Guatemala, Dutch and his men discovered the skinned bodies of Jim Hopper and his men; the gruesome find greatly disturbed the hardened mercenaries.

After neutralizing the guerrillas and capturing one of their member, Anna, Hawkins learned over the radio that a much larger rebel force was closing in on their position, forcing the team to exfiltrate on foot. During the march, Anna attempted to escape, with Hawkins taking off in pursuit. While he quickly caught up with and subdued her, he was almost immediately killed by the Jungle Hunter, which disemboweled him and took his body. His corpse was later hung by its ankles from a tree, although the rest of Dutch's team never located it.

Despite never recovering his body, the circumstances of Hawkins' death convinced Dutch and the rest of his men that he had been killed by whoever had slain Hopper and his team.

Hawkins was a comic book fan and a die-hard comedian, constantly cracking crude jokes, usually in an attempt to make the humorless Billy laugh, a task at which he typically failed. Visually he did not fit in with the other team members, set apart by his nerdy or even goofy appearance. However, he was a skilled combatant with lightning-fast reflexes, as demonstrated when he caught a stress ball thrown at him by Poncho without even looking.

Notably, Hawkins seemed to treat Anna with a higher degree of respect than the rest of Dutch's squad, actually attempting to calm her down during her second escape attempt. Additionally, unlike most of the squad, Hawkins did not seem to immediately take a dislike to Dillon, nor did he appear to hold a grudge against him even after the true nature of the mission was revealed. 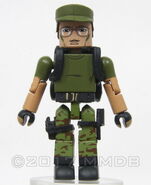